Sand in the Bone: Marks and Risk

In this post, I talked about weapons and weapon damage for Sand in the Bone. I said PCs would have "Mastery" they can spend on weapons. I've thought a little more about this and realized that I already have a thing called "Marks" which can easily cover weapon skills. So I'm folding the idea of mastery into Marks.

Characters begin with some number of Marks. A Mark is really just any special feature the Player wants to highlight about the character. Since this game doesn't have any traditional attributes, such as strength or intelligence, Marks allow you to customize however you like. So Mark could be a special skill, a relationship, a magical power, or even some kind of curse or negative trait.

Now, I do not want to go the positive vs. negative balance sheet route. In G.U.R.P.S., for example, you can gain points to buy skills and advantages by taking disadvantages. Need another 5 points? Give yourself a paralyzing fear of snakes. And so forth. This is a fine mechanic and I don't ever mean to give that game shit for what it does. It's solid. But I don't want that here.

So my idea is that there is a mix of creative and random elements to chargen. The random means you might get a negative Mark, such as a curse. That way we don't have to fuck around with making PCs that have intense coulrophobia in order to allow for extra perks. I want to be a better gymnast, so I'm making my dude a galaphobe! 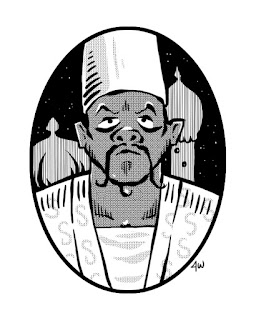 Which leads to another concept I'm definitely working into the game: risk. Choices matter. So during chargen, Players have a baseline method for making a character and they can stick to the baseline and come up with something awesome. Or they can choose to take risks in the hopes of getting better results. This will manifest as multiple chargen tables you can choose to roll on. While there may be one basic table to roll on (A), you choose to roll on alternate table B or C, each of which have more potent results but also more drawbacks.

I want to carry that concept through the entire game. For example, the use of Sand, which I talk about here, is inherently risky. And not just in the random dice rolling way, but in the sense that you are making choices that increase or decrease risk.

ASIDE: I had flirted with the idea that you could play this game absolutely middle of the road. Making almost zero dice rolls, you could sort of coast through conflicts. But the tradeoff would be that you could never have amazing success or make incredible discoveries. You'd be living a boring life for a great adventurer. So I'm not sure if I want to include that or not.
Posted by James V. West at 9:48 AM