Finally, it is HERE. Black Pudding 7.

This issue features the following awesomeness.

Queen of the Dark Light

And the rest of the issue is a gazetteer of Yria, the setting of Black Pudding. It is an iteration of Pan-Gea. The five cities described, many areas sketched out, lots of random tables. 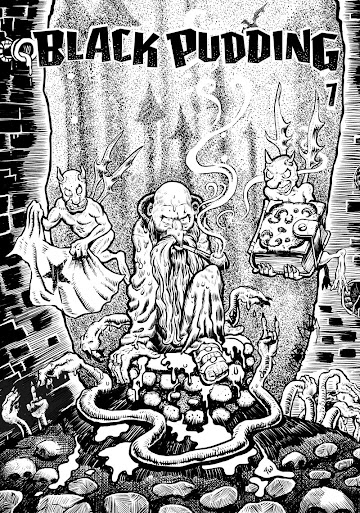 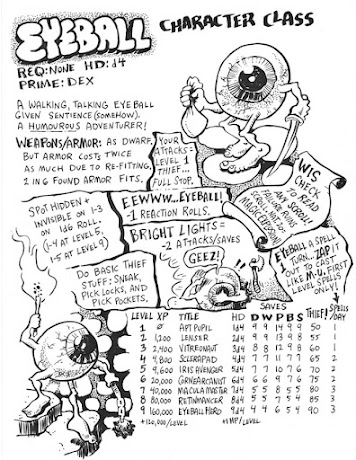 The gretch is a monster that appeared in Black Pudding #1 in 2016. It is basically a thing that spontaneously appears from old candle and spell residue in a wizard's lab. I picture old wizard towers having at least a few gretches roaming around. Perhaps the wizard wasn't able to control them and they murdered them in their sleep?

Poking around in old documents I rescued from an old computer, I found what is certainly the first reference to the gretch, from 12/2007 or earlier:

Cir Lan – A wicked sorceress searching for the swords of the Old Kingdom to tap into their mystic powers and discover the great secrets of life. She uses winged gretches as familiars and always has a wild look in her dark-ringed eyes as if she were on speed.

I have never used a gretch in a game. I need to remedy that.

Black Pudding #7 is coming along very nicely. Got several new character classes in this one... including my new favorite THE EYEBALL! 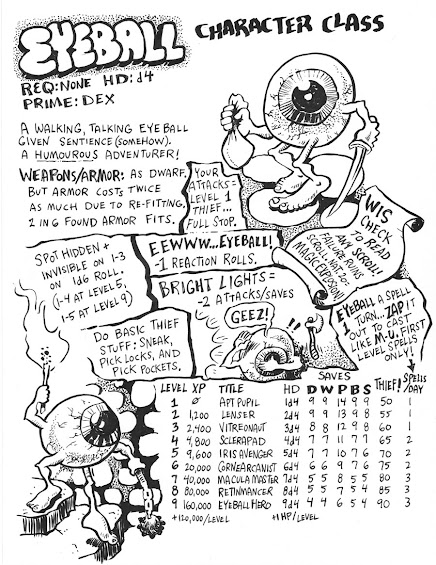 I Married My RPG Folder But it Ain't Working Out

God damn, I haven't done a non-review since last October!
Let's look at some PDFs I have lying around cluttering up my desk and gathering dusk. I'll just reach out blindly and grab one or two... 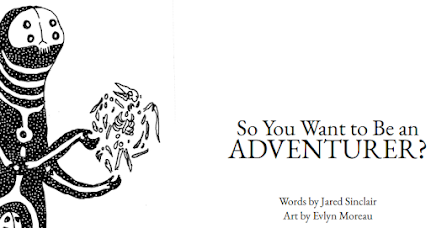 So You Want to Be an Adventurer? is a wee little PDF of a mere 19 pages (including a solid black page) by Jared Sinclair with wonderful art by Evlyn Moreau. I cheated a little on this one because I picked it up today, so it wasn't gathering dust on my digital desk.
Usually in these non-reviews I don't read the game ahead of time. Usually I'm just looking at them for the first or second time and giving my off-the-cuff thoughts as I go. But this is a swift read. It's really just a conflict resolution mechanic, some simple rules for making a character, and a bunch of pages of cool pictures with TONS of blank white space to write in.
Character creation is writing down a certain number of things about your character (not an arbitrary number of things, but certain things). No stats or numbers are involved, it's all imagination.
The mechanic is to roll 2d6 and try to get 8 or better.
If you have a thing that benefits you, add 1 to the roll. If you have a thing that hinders you, subtract 1. Stack these up appropriately. For example: I have the high ground and a badass axe so I get +2 on my roll to fucking kill you. Or... I have a janky leg from a fall so I have -1 to jump that ravine. Etc.
Um... that's it. That's the game.
This is definitely a minimalist game. And there isn't much to say about it as a "system". Of course this game will work. You'd be hard-pressed to find a more heavily playtested mechanic than roll 2d6 and beat a target. The target of 8 means you effectively have a 50% chance of doing anything (not exactly, it's actually slightly less but who cares?). So the real meat of play probably comes from really using those advantages and disadvantages, narratively. Which is very cool.
There are a million games like this you can find at any moment. And of course that's to be expected. This type of system is kind of bedrock to the entire hobby. This is just a "here's a way to resolve things, now GO" sort of project. With most of the space left over for you to write new rules and ideas. I believe there are people who might pick this up and go "What the actual FUCK did I just pay for?" because let's face it... you can slap this together on your own in a hot 15 minutes and do your thing (but it won't be as awesome without Evlyn's art). There is nothing new here, nor is it claiming otherwise. But some folks will feel a little cheated, I fear.
Maybe this just appeals to some other types of folks (myself being one of them to a large degree)... this is a book that invites you to come and play and be creative. It wants you to make shit up. It wants you to enter the imagination zone. This is a "game" that reminds me of what I invented as a 14 year old who had only experienced RPGs one time and didn't own any. I made shit up. It was magic.
As a lover of ideas and tools for making shit up, I approve. 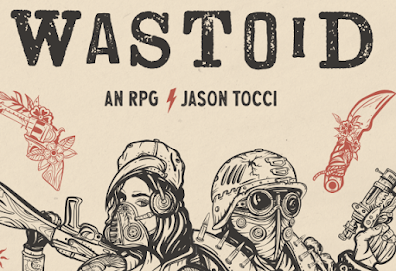 Wastoid: An RPG by Jason Tocci.
34 pages, based on Knave by Ben Milton, and inspired by Fallout. With very cool art. The layout is clean and simple and certain headers and stuff do remind me of the Fallout game aesthetic (though I never played it, my kid played the shit out of it).
In an interesting twist, character creation doesn't come until halfway through the book. Bold move, Tocci.
I like the use of "game moderator" instead of "game master". You get to keep the GM term that is so ubiquitous but you ditch the "master" part that seems to bother some folks. Very nice. But I'll still use Judge nonetheless.
There's a nod to Jim Wampler's Scientific Barbarian zine. Very nice.
On the "playing the game" page, there are three important aspects of game play described. One is to set boundaries, such as "let's not have rape, ok?". I have no idea why this type of suggestion triggers some folks. The very idea of DISCUSSING things ahead of play is somehow alien? Like... I get it... when I was gaming back as a teen we didn't discuss jack or shit before playing. And we had some monumentally FUCKED UP experiences that probably would have been smoother and more fun if we'd just... y'know... talked about it.
Another one is to telegraph intent, as a player. So instead of saying "what's in this room?" you say "I stand in the doorway and casually scan the room. What are some things I can see?" This is very nice because it shares some of the labor more equally. So often in games, the players really do shove everything off on the GM.
I'm not super familiar with Knave, so I don't know how closely this game cleaves to it. I can see that it is largely OSR-friendly with d20 rolls, 2d6 reactions, and so forth. Seems straightforward.
The initiative system is the same as what I used in GOZR, which is the same as Mörk Borg, which is the same as Knave, and I have no idea where that method originated. But it works and I like it.
Cool stuff about junk. You gather junk (because in the post-apoc hellscape everything is junk) and you can "spend" it to repair weapons and armor. Very cool. And probably a nod to the computer games? I dunno. But I like. Roll 1d6. On 1-3, enemies go first.
Yeah, this is sweet. You got stunts, rads, and mutations. If you are into post-apoc, you'll probably dig it.
Posted by James V. West at 9:11 PM 1 comment:

Hey all, GOZR has arrived and will be shipping out any time now! Just look at this sweetness, courtesy of Peter Regan. 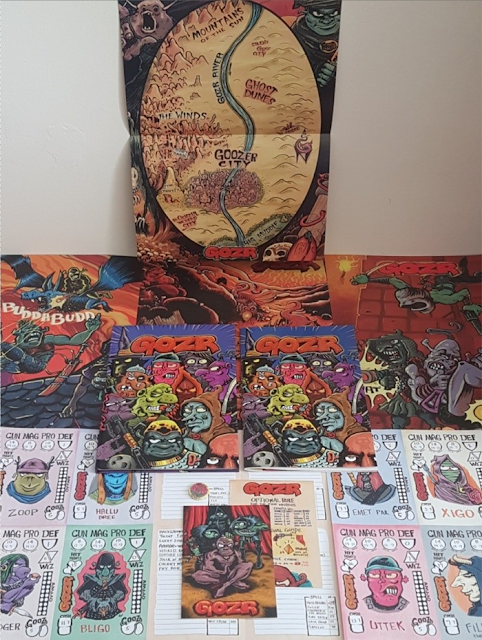 Email ThisBlogThis!Share to TwitterShare to FacebookShare to Pinterest
Labels: GOZR

Here's a one page GOZR adventure: Tower Trouble. You can get a PDF of it here. 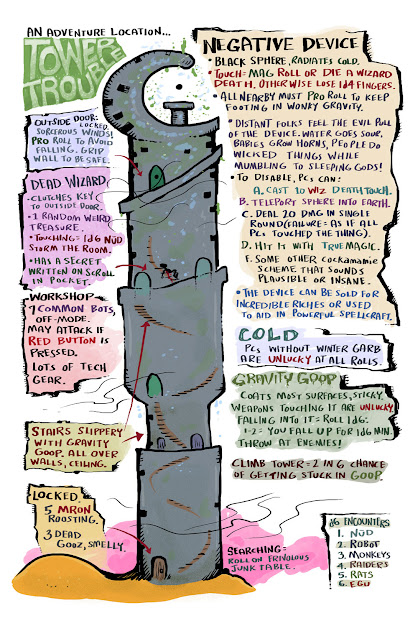 Working on some dwarf art for the Rock Hardy Book of Dwarfs... not sure when it will be ready but the thing is actually mostly written so maybe I should finish it up already. 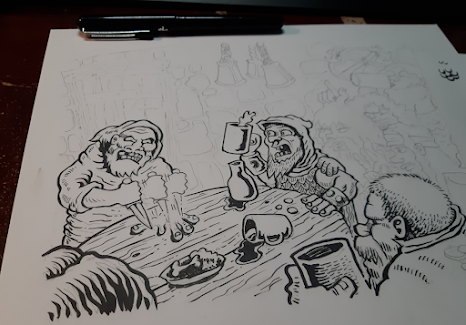 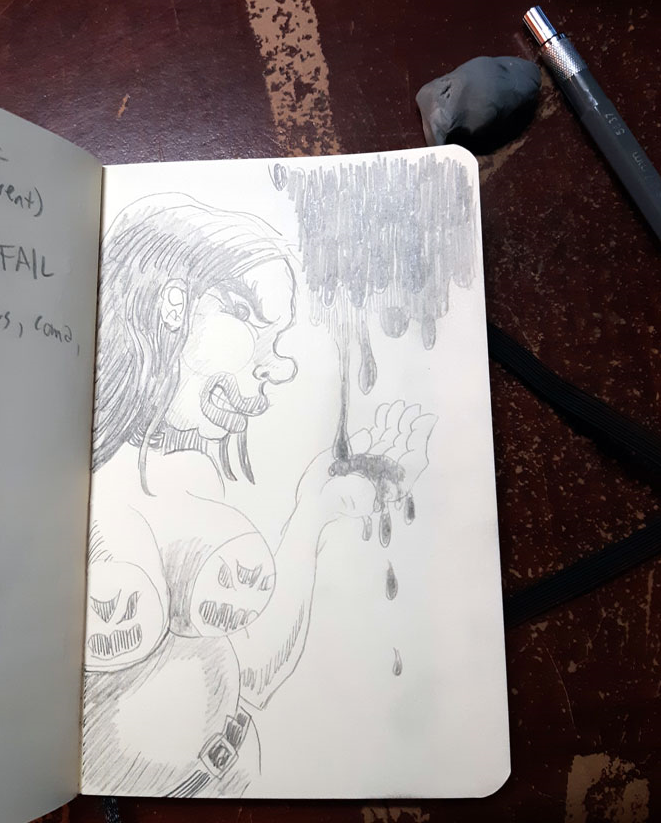 I've been on a bit of a pinup art kick lately. Just in case you're into pinup art, check out my other blog Blood Red Pinups, my Twitter of a similar name, and my Instagram also of a similar name. I don't have a Facebook just for pinups. I figure this is enough. I seem to get the most engagement on the Insta account, but the Twitter one is not nearly as old. Plus I only do this sporadically and only for fun.

Then again I do everything related to art and games for fun.

This is really interesting. I never noticed that some issues of Weird Tales had an NRA logo. So I looked it up and I ran across this blog post where a woman had done the same thing a few years ago.

Long story short, it looks like the NRA being represented on Weird Tales is the National Recovery Administration, not the rifle people. This other NRA was an organization created during FDR's administration to help facilitate negotiations between workers and employers and to set prices and fair practices, and so forth. Ostensibly, an organization meant to mitigate the worst instincts of capitalism with relation to workers and bosses. Not exactly the kind of thing the rifle people are interested in.

This cover is from 1934. The NRA (not the gun one) was created in 1933. I don't know much more about it, I just found it very interesting. One of those "Well HUH" moments for me since I do love looking at Weird Tales covers but I never paid attention to this. 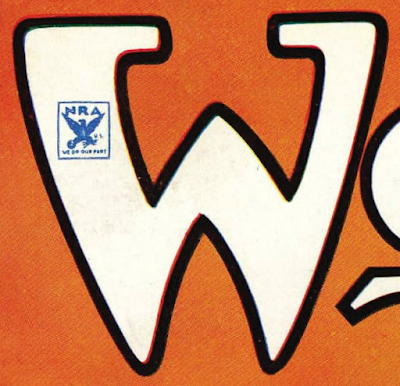 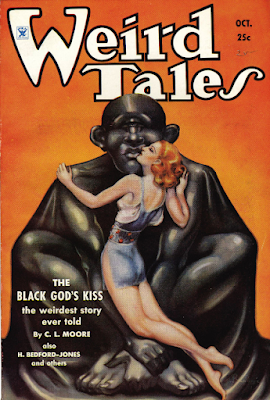 I did a few comic panels recently. Started out as a guide to my fantasy world of Yria. I have no idea where this is heading now.

The character Hunter Ravn was formerly Hunter Raven... but I left out the "e" on the inked version and didn't want to adjust digitally. So now he's officially Hunter Ravn. Maybe that's why I took the whole thing in a slightly different direction. Is this God of the North a frat dude?

Anyway, I've just been having fun with my old traditional art tools and these panels were an excuse to use them. Digital colors to follow... 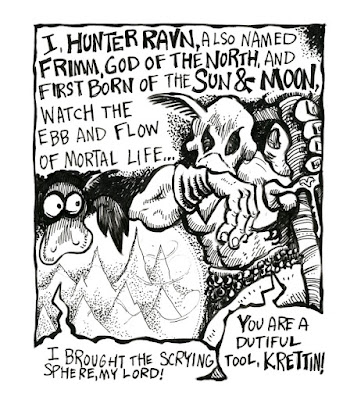 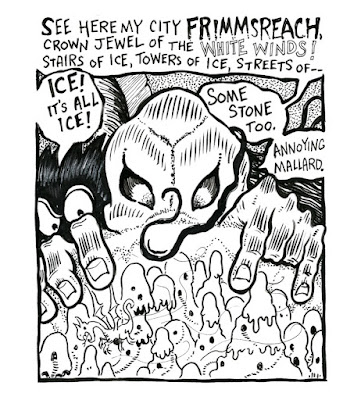 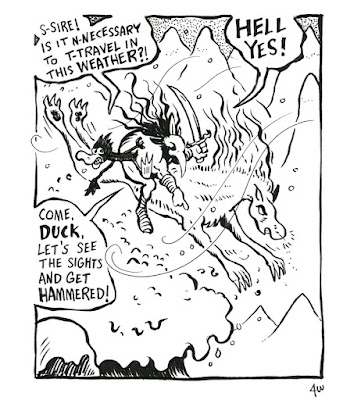 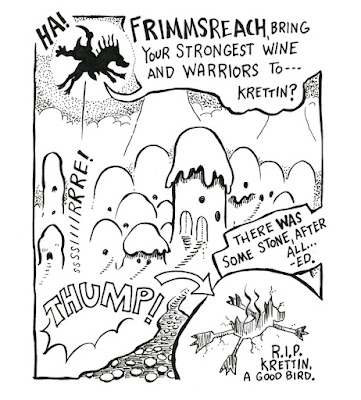