Check out the post over at my Blood Red blog for more variations. 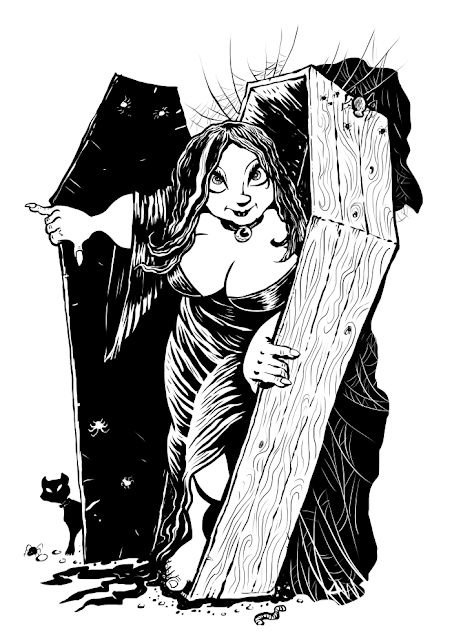 In 2009 the Intuos 4 graphics tablet was released to the masses and I got one. It was my second tablet after starting with a small Bamboo. Since 2009 I have used two tablets: the Intuos 4 and an XP-Pen Artist 16 pen display tablet. My experience with the XP-Pen is shitty. The hardware was OK but the drivers... holy shit they were terrible. Constantly crashing, freezing, losing pressure sensitivity, etc.

After using the XP-Pen for less than 6 months I said fuck this piece of shit and I dug out my trusty Intuos 4. It felt like an old friend returned to me in a time of need. This tablet is a god damn workhorse. I have used it for a solid decade to create almost every piece of art you've seen from me during that time and it shows no signs of slowing down. No dead spots that I can detect, the pen is absolutely pristine, no worries at all. I assume the buttons on the side still work but honestly I'm a keyboard guy so I don't even touch those buttons. I have my work habits and I'm a bit unwilling to change. Insert old man yells at cloud meme here.

The Intuos 4 never crashes. It works seamlessly with my ancient machine. Losing pressure sensitivity is extremely rare and seems to be more related to my drawing software than the tablet. And look at those nibs! They are all in perfect condition. Hell, I have used the same nib on this damn thing for years at a stretch. I mean... they don't really wear down, do they? If your nibs wear down maybe you're murdering your tablet?? Ease up.

Anyway. Love my tablet. I will eventually upgrade, probably when this machine finally chokes up its last gasp. But for now we're good. 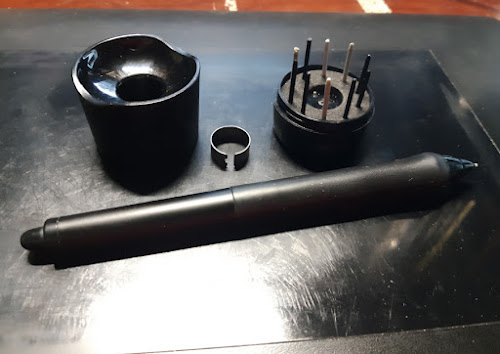 I doodled these dudes while playing GOZR, which Andy is running for our Monday group. We are currently entering Gooz York! 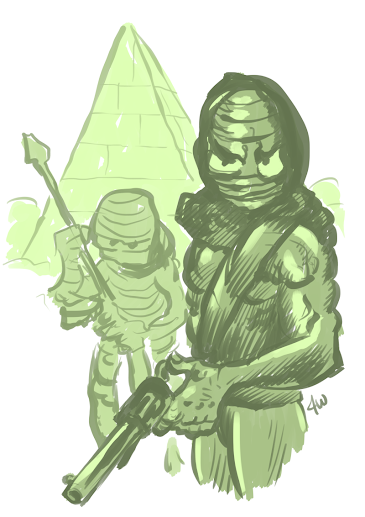 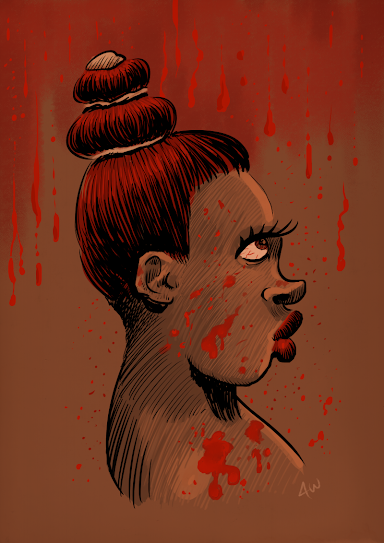 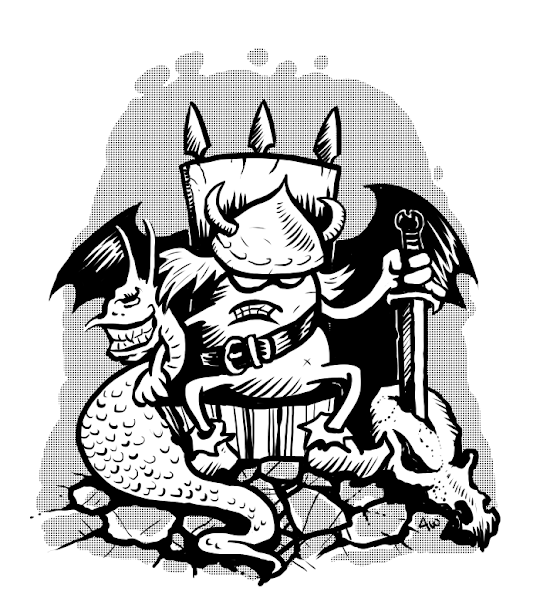 I did a bit of fan art for J. Freels' Bean! the d2 RPG. I love that game and I love Freels' cartoon art style. Go check it out. 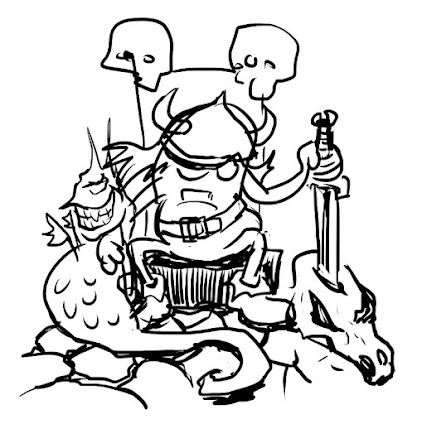 I Shot My RPG Folder

I haven't done any blind reviews in a while. Owing to my lack of focus, let's do this random ass shit. As always, I often do not know who the fuck makes these games so if you dislike any of the creators that's just on you, man. 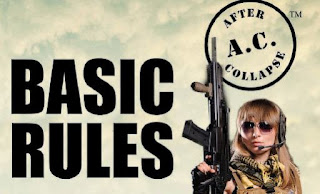 I really have never heard of A.C. : After Collapse by Justin Oldham published by Shadow Fusion. I'm honestly not sure how I got this. Maybe a bundle? No shade to Shadow Fusion, but I would never buy a game like this. Even though I loved The Road Warrior and made my own post-apoc RPG called "Surivors" based on it when I was 15, I am just not into the militant post-apoc jam.
So this game says it is a d20-based system, classless, with detailed combat rules and rules about radiation, etc. Interesting thing: it says that there are three classes of RPGs in the Collapse timeline. There's B.C. (Before), D.C. (During), and of course A.C. (After). So you can play games I suppose in modern times while the world is still humming along and during the tumultuous collapse and then after it.
Shit, this is from 2019? That's pretty recent.
So my first impression is that this is too big and not my bag. It's 286 pages... about 200 pages more than I need or want, generally. But that's just me.
Oh no... there's Upper Body Strength and Lower Body Strength and there's an Attractiveness stat. And damn, the section on batteries takes up half a page of the table of contents! Batteries must be a big fuckin' deal.
The Collapse seems to be brought about by AI, perhaps inspired by Terminator? There's a bit about homeowners gating their communities and trying to ignore what was happening in the world around them. Seems familiar.
Ultimately, a game with an "Upper Body Damage Modifier" is just not going to be my taste. If you like crunchy systems and if you're into something like Twilight 2000 maybe this is your jam. 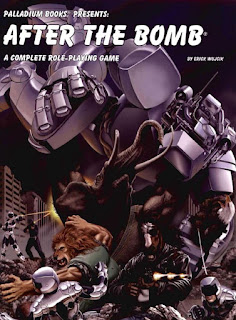 Way back in the old days, Palladium had the license to do Teenage Mutant Ninja Turtles RPG stuff. The original After the Bomb was a supplement for TMNT and Other Strangeness. I suppose since that license has probably lapsed, Palladium just made a whole separate After the Bomb RPG.
I picked up this book recently because I kinda dig funny animal RPG shit and I already owned several of the related supplements.
There's a weird disclaimer right at the front where Palladium says they do not condone the practice of magic, among other things. As if this game was gonna find it's way into the hands of little kids whose parents are Bible thumpers. This is 2021... Tik Tok exists. After the Bomb is really no threat, guys.
Looks like Erick Wujcik based this entirely on the house system. Cool. I don't have much to say here... I like that this exists.

Ok, I picked another monster of a book. This sumbich is 350 pages! Ehdrigohr, a game with precisely the right number of hs in its title, is by Allen Turner, published by Council of Fools, and is powered by Fate. Now, I'm not the biggest Fate guy. Which is weird because I mail ordered a copy of FUDGE back in the 90s and loved it. But I guess if I'm gonna do a FUDGE then I'll just do a FUDGE. No shade on Fate, I know a lot of folks who dig it.
Oh shit is that Papyrus font? Bold.
So the premise is that nine tribes of people dwell in a broken world of darkness where they struggle to maintain the light. There are chaos monsters or something roaming the land. You play someone who probably wants to keep the monsters at bay and protect reality. Cool.
I am not a big fan of the graphic design. It smacks too much of the high desktop publishing era. There's a border around each page and a lot of use of watermarks. We don't see any spot art until page 27. But I do like that that aesthetic is kind of Native American or Mesoamerican... I know next to nothing about this, so I'm not even sure what terms to use. But clearly from the art and some of the language of the book it is in this vein.
Though the art is kind of scant, it is pretty cool. Not all of it is my vibe but I dig it. I just wish they hadn't let the watermarks bleed through the art. Again... smacks of "I CAN do this so I WILL do this" desktop publishing. Just a pet peeve.
Ok. This looks like a true labor of love and I'm not gonna poo-poo it. There's a lot of worldbuilding in this thing. It's BIG. For me, it's just too damn much and I'm just not into Fate. But if you like Fate and you like the aesthetic then by all means dig in and see what's here.
Posted by James V. West at 3:38 AM 3 comments: 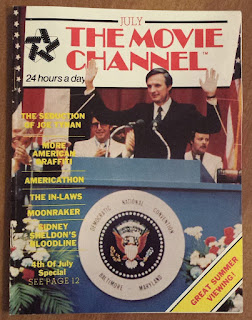 Not my normal blogging topic, but this is a nice place to put shit.

I haven't found a lot of scans of the old TMC guide. For a brief time in the very early 80s we had TMC and got this monthly guide. In total, it was probably only 2 or 3 months. I remember the movie Excalibur was on TMC at the time.

I have strong memories of sitting on the couch just looking through the guide. I was fascinated by it. There are movies I have never seen before that I remember fondly just because of reading their description and seeing little thumbnail images in these books.

The time period I'm talking about included the films Excalibur, 1941, and The Postman Always Rings Twice (good viewing for a 12 year old). 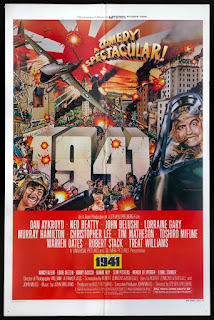