Some of these elements were lifted from other sheets, such as one I did for Andy Solberg's Iron League. So it's a bit of an amalgam. But I really like the balance here. It's not too busy and it's nice and clean. Some things are not represented, such as alignment, but that's easily inserted ("chaotic magic-user"). I added "willpower" to the Wisdom uses because I use the standard modifier in my games for certain on-the-fly tests of willpower.

EDIT: I corrected the sheet due to a few errors. Thanks for pointing them out, everyone!
Posted by James V. West at 1:32 PM No comments:

This Wed at Jarfly, a local brewery, I will be running some good old B/X D&D. With house rules, natch. What house rules, you ask? Not too many. In fact I'm keeping the system-wide house rules to a small number that I just can't live without. Crits, luck, death saves, some stuff about magic-users, fighters using monster attack roll table, and of course THIEVES.

I will be employing Necrotic Gnome's lovely re-indexing of B/X D&D called B/X Essentials. I shall put those little books to the test.

Also, here's the character sheet I'll be using. I'm taking about 20 pregens to the table. Several fighters, magic-users, and thieves. A couple of clerics. And some oddballs like swineriders, neanderthals, witches, and summoners (some from Black Pudding, others not). Stoked! 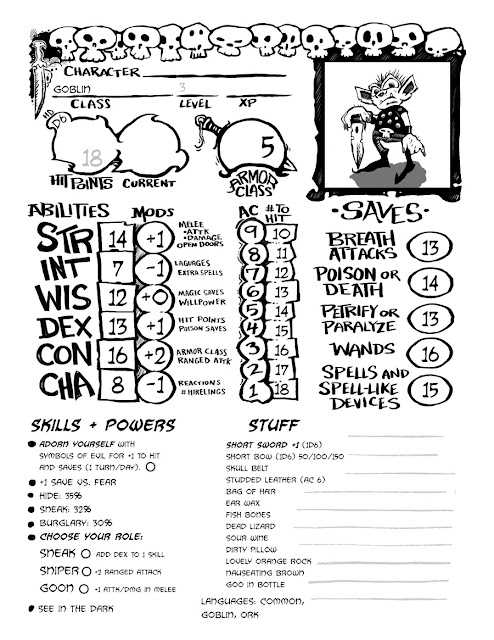 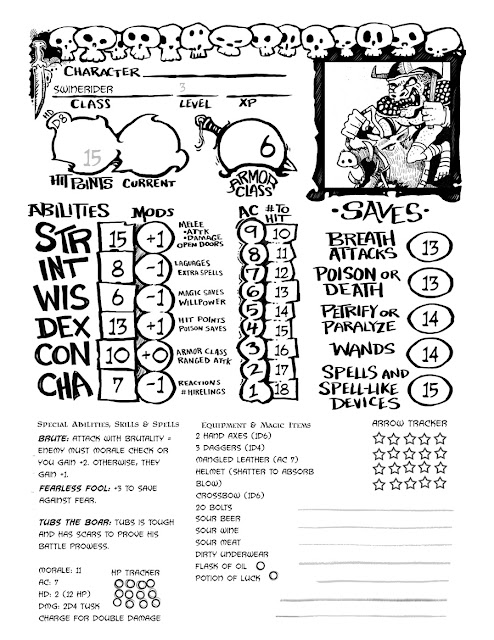 Attack rolls: Those of you paying nerd level attention will note that a level 3 dwarf in B/X should hit AC 0 with a roll of 19, not 17. I decided that fighters and fighter-based classes such as dwarfs should not be hitting at the same rate as god damned magic-users for three levels. So they will be using the attack matrix for monsters instead.

Character sheets: These sheets are a combination of a few different sheets I have worked on in the past. They combine elements of a sheet I did for Andy Solberg's Tales of the Iron League with some other sheet elements I have used here and there. You'll also possibly note that the "special abilities, skills, and spells" type headers are copy-pasted straight from a Dyson Logos character sheet. This is because I had a whole other set of level 3 pregens that were on his sheets. I wanted to transfer them to my own sheets but I was too lazy to redo those bits so I just copied the necessary stuff. It's a Frankenstein's character sheet!!

EDIT: I swapped out the images on this post because the originals had the ability score list screwed up. 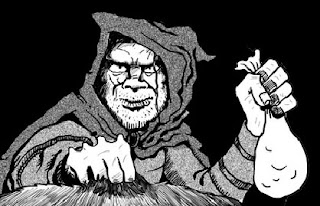 Here's a thing I picked up recently on a whim. Here's how it happened:

1. I saw a post on G+ where someone was selling Bushido RPG books.
2. I remembered owning Bushido in high school. It means something because it was the first time I got a money order and mailed off for a book. Special!
3. Noticed the books were not in original box. Nerd mind kicked in.
4. Found complete box set on eBay, sans the wacky tiny d20 that my original set came with.
5. Bought the damn box set.
6. Spent some time looking at it, flipping through the books, reading some bits I remembered from long ago. Smiled.
7. Posted about it.

This isn't actually the printing of the box set that I owned back in the day. Mine was all black. I ordered it via a Dragon Magazine ad. I think it was $8 if I remember correctly. I was so excited when that package arrived! I do remember this stuff being in my box, but also a tiny tiny d20.

The box may look like shit, but the books and other contents are in excellent condition. There is some wear on the books, but not much. The map and reference sheet are perfect. Almost as if they were never used... hmmm.

Thing is, I never played this game. I never even fully read the rules. I skimmed it, read bits, stole bits, and got inspired by it. I remember especially being fond of stealing the weapons table and using it for D&D. I even wrote up a budoka character class for D&D and rolled up a few PCs that I never used.

So the thing about Bushido is that I'll never ever run it in a hundred years. I'll keep this box set, mostly on the shelf, and I'll pull it out now and then to look at it. I'll maybe eventually read the whole thing. I'll steal from it and be inspired by it. But I have no illusions about running it. Not gonna happen. And since this is an FGU game I probably would not like the way it plays anyway. The presentation is crunchy and I'm not a big fan of crunch.

Of course if I found a group playing it I might join in at some point. That much is for sure.
Posted by James V. West at 10:10 AM 2 comments: