I started putting together my favored OSR style rules, arranging them into sheets I can print and put into a ring binder for use at the table. The goal is to have a single binder with all the stuff I need to run games the way I like to run games. A lot of these sheets double as player handouts, so the players get a huge benefit as well. For example, you can just have a copy of the Fighter class if that's what you are playing. And so forth.

The project is currently called Yria Fantasy Campaign, named for the setting in which I place most of my OSR-style games. That could change. I favored Doomslakers OSR as the title, but people keep calling it Doom-SLACKERS... it's not "slackers". It's Doom-SLAKERS... as in "to slake the doom". *sigh* I always hated the slacker movement, so there's a negative vibe for me.

Anyway... back on point. 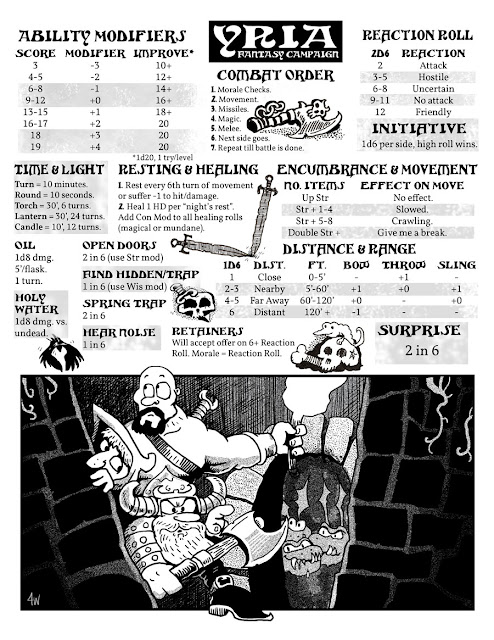 Yria is, of course, based on classic D&D via the various retroclones that emulate that game. Specifically, I'm using Swords & Wizardry White Box as the skeleton, with ample meat from B/X (Labyrinth Lord). I'm using ascending AC, so un-clench all you to-hit-table-haters.

The first sheet is pictured here. It's the very basic, common tools a Judge uses at the table. Stuff like reaction rolls and surprise, resting, healing, and opening doors.

I thought about going with a universal d6 system for all of that stuff, or going with ability checks like The Black Hack does. But in the end I decided this was such a small, simple list of tools that I could keep a ton of the original flavor without complicating or confusing the matter. It's really not that hard to remember when to roll a d6 and when to roll a d20.

Next up, a look at character creation. Also, all of this is subject to extreme change. And yes I do plan to compile the whole affair into some sort of book in the end.
Posted by James V. West at 8:16 AM 2 comments: