Here's a character class I wrote up one day just before GaryCon. I handed out printed copies to folks and finally, just this past Friday, saw the class in action. The guy playing the Lug (who he named Lug) was having a bad night, rolling less than 10 on all his attacks. But he did manage to smack the bejeezus out of the party's Medusa (another class I'll post) to snap her out of a monstrous daze.

Note: Made a correction to a typo...pay no heed to it. 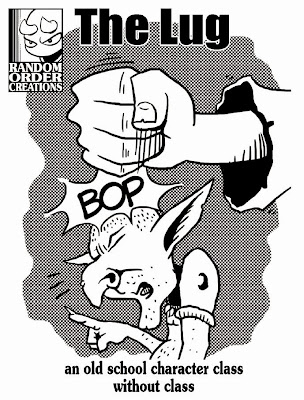 Lugs are big. Really big. And often clumsy. They may be taller than anyone they know, and they can definitely out-eat them. When a lug enters a shop full of delicate wares the shopkeeper usually has a heart attack. A lug may have grown up pulling grain carts or wrestling cows or perhaps mother nature just saw fit to give them five times the mass of any normal person. Either way, the lug's great strength serves them well.

A lug must eat twice as much food per day as a normal adventurer.

When faced with a riddle, puzzle, or other mental challenge the lug must pass a saving throw vs. spells or be dazed and confused. Only passing the save will snap them out of this stupor. The save can be attempted once per round.

Lugs are off-putting in their awkwardness and invoke a penalty of 1 on all reaction rolls. Oddly, the lug receives a bonus of 1 to reaction rolls from ogres and hill giants.

Lugs may use any weapon, though small weapons such as daggers feel too small in their hands and they have a -1 penalty when using them. They can wear any armor if it fits them. As a rule of thumb, any randomly-discovered armor has a 2-in-6 chance of fitting (with some tender modifications that take 1d4 turns). Lugs use the saving throws and attack values of a fighter.

Bop!: Lugs tend to be tall and may use their height advantage to bop targets on the head. Lugs have become so skilled at this that when making a bop attack with their clenched fist against a target that is shorter than the lug they get +2 to hit. If the modified attack roll is 16 or higher and hits, the target must save vs. paralysis or be knocked out for 1d6 rounds. If the modified roll is 20 or higher and the save is failed the target is bopped out for 1d6 turns.

Charge!: A lug can charge, like a monster or mounted rider, dealing double damage on a hit. But the lug is so adept at using their mass that the charge only requires 30' of room. However, if the lug fails the attack roll they are off-balance and suffer a -2 to hit on the following round. Targets hit by a lug's charge must pass a saving throw vs. paralysis or be knocked prone and must use their action on the following round to stand up.

Hefting the Blade: A lug can wield any two-handed weapon with one hand, dealing the two-handed damage rating for the weapon.

Intimidator: A lug may use their great size to intimidate foes, forcing a morale check under the right circumstances. The lug's Strength modifier may be applied as a penalty to the morale check, per GM discretion.

Juggernaut: When a lug is hit with any effect that would knock them down or move them out of the way they may make a Strength check to remain standing. Where applicable, the lug's Strength check may be modified by the Strength modifier of the attacker.

Smack!: A lug can open-palm smack the catoblepas poo out of a target if they can reach the target's face. This attack has a +1 to hit and causes 1d4 points of damage if the lug chooses to cause damage. The target must then pass a saving throw vs. paralysis or be dazed for 1d4 rounds, unable to take any actions other than staggering away at half their movement rate.

There is a chance that a lug's smack can free a target from certain conditions caused by magic spells or other magical sources. A target under the effect of charm or hold spells or very similar spells may make a saving throw vs. spells upon being smacked by a lug. If successful, the spell is instantly broken...but the character still suffers 1d4 rounds of being dazed.

Toss 'Em: Lugs are very good at grabbing things and throwing them. A lug may throw any object within reach that is less than half their height and weighs no more than 150 lbs. Treat this as a thrown hand axe for range. The thrown object deals 1d6 damage plus Strength modifier. If the object weighs more than 100 lbs the damage is increased to 2d6. Objects used in this manner have a tendency to be broken...so the party halfling should beware.

Yeah, so the Labyrinth Lord campaign I ran I did this weekly episode notes thingie. I'm not doing that with DCC. I started out that way but rolled a 1 on my spellcheck.

Here's what's going on in the campaign in a nutshell:

The PCs are working for a devil woman named Hella Nor. One PC, named Oryx, has taken Hella as a patron to his wizardly ways. Hella has sent the PCs on a couple of missions to reclaim her lost crystal balls.

In the second mission to retrieve a ball they ended up on a magical ship that dropped them on a purple planet. Trapped in a prison beneath an arena of warring kith the PCs freed a witch named Irene and piloted another ship off the purple planet. Things went awry and now they have crashed and are stranded on a hostile jungle island in an unknown world.

The meta plot seems to be unraveling the doings of the War Wizard, who seems to have more tombs and ruined fortresses than you can shake a lightning spear at. And the few PCs who survive from the funnel know that their entire memories prior to that first adventure are somewhat suspect. It seems they lived in a bottle city, possibly because of the machinations of the War Wizard or a mysterious figure known as the Mind Master.

Artifus (level 2 botten): Once a brave squire named Ammet, Artifus died in the War Wizard's tomb and was brought back to life through sorcerous science as a cyborg...a botten!

Oryx (level 2 wizard): The son of the ill-fated heavy drinking monk Voss, Oryx has become a fanatical devotee of Hella Nor and...unfortunately...a terrible wizard whose spellchecks never seem to break 7. He is the PC most likely to die, by all reasonable measures. Yet he lives on...

Parsley (level 2 cleric): This happy-go-lucky girl doesn't have an ability score higher than her shoe size but she was chosen by Shul, god of the moon, to be his earthly troubadour. Hey...she killed the Master of Eyes almost by herself.

Billy Bobbius (level 2 druid): Nearly as smart as his brother, the druid feels nature in his veins and possibly other body parts.

Bishop (level 2 warrior): This sea-faring salty dog hitched a ride on the ship that carried the PCs away from the destruction of the underground ziggurat of the Master of Eyes. He's tough and has a way with the ladies (ships).

Smoke (level 2 thief): She's tough as nails and silent as a mouse. She's thick and smokey and badass...can she keep these other guys alive on the island of certain death?

Cezra (level 2 paladin): He's got a strange and storied past and a zealous devotion to the ways of mighty Cthulhu. His paladin's blade strikes true against the enemies of his god!