Here's a new Rabbits & Rangers drawing for the upcoming project. This was based on a sketch that  had been sitting around for at least 3 years, maybe more. I had actually started inking it over a year ago and finally sat down and knocked it out this morning. Turned out pretty cool, I think.

This drawing made me think about flying rules, which I cover fairly well in the current book. I am going to re-write that section to make it simpler, less fiddly. But the point is simple. A bird character can't fly and carry their normal amount of equipment. The bird in this drawing cannot fly without doffing their cloak, at least. I say in the book that you can hold one small item and still fly. So the staff would be out too. But I'm considering some ways in which a flying caster could still fly with a staff, as part of the fabric of the setting. Like a spell or special skill they learn. I'm not sure yet. 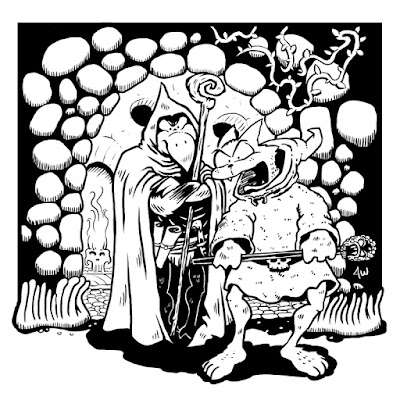 Werepig in a World of Piggies

In Rabbits & Rangers I have a short section on lycanthropy. It's a weird idea, isn't it? A world of talking animals... what do the lycanthropes turn into? I suggested in the book that a PC infected should randomly roll what type of animal they transform into. In that way, you could be a duck bitten by a wereskunk and then you transform into an evil, bloodthirsty werepig.

I still like that idea. But in the new game I'm going to leave some of it up to the Ringmaster's discretion. I'm trying to keep my rules and text more open to rulings-not-rules. While I am very proud of the R&R book based on Labyrinth Lord, I still find even that to be a little too fiddly for funny animal fantasy as I want to experience it.

Anyway, yes, I'm currently working on the new game. Still no real idea about when it will be ready. I'll share more as I get more into it. 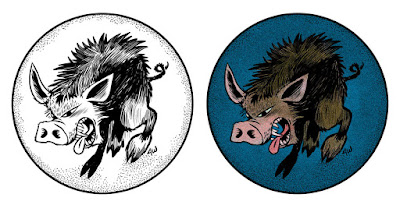