In the mid-90s I got a subscription to Shadis Magazine. From there I ordered FUDGE, and from FUDGE I got SLUG. Looking back on my notes and scribblings from that era, it is very clear that FUDGE and SLUG were huge influences on how I thought about game design. My designs prior to that were hacked up riffs on D&D, Star Frontiers, and perhaps a bit of Bushido. I think it was probably seeing SLUG that planted the seed in my mind that an RPG system can be uber simple and still work.

I never ran SLUG and I kind of didn't love it. The reason was that I craved some kind of metric for deciding just how awesome a PC is. Not just having the player declare it, but having a way of measuring it or giving it a nudge in game. SLUG can do that, of course. The GM can assign modifiers. But there's no inherent way for a SLUG character to have a modifier. Clearly O'Sullivan intended for the characters' descriptions to provide that element. But I've got just enough crunchy bits in my blood that I need a little more.

The Pool is influenced by O'Sullivan's games. He even uses the term "traits", which I tended to use all the time from that point forward.

As an aside, I never ran FUDGE. But owning that game and reading it and understanding that it was open source (I'm not sure what the term was in 1994, but it opened new doors for me) made me want to create content for it. I took my older game idea for a fantasy world called Midaka - up to that point being ran via GURPS - and started fudging it up. But alas I never managed go get a game together.

But by 1995 or so I was running games (infrequently, randomly) using a personal system not unlike SLUG (in spirit). I called it the "ROC System" for a while. This was based on my comic publishing imprint Random Order Creations. The system was this:

1. Describe your character. Use an image if possible. I suggested using art cards, which were all the rage at the time.

2. Write down some traits based on the description and/or image.

3. Distribute 20 points between the traits as you like. All traits need at least 1 point. Each point is expressed as a +1.

That was the entire system, start to finish. I never developed any sort of crunchy bits from it. No damage or death system. I think I gave players 1-3 points after a solid adventure and they could add them as +1s however they liked. That notions probably came from playing Star Frontiers.

The new game I'm working on uses this rudimentary system as its basic unit, but with some important differences. But I'll get into that later.


Meanwhile, FUDGE or SLUG it up!

The Pool - Videos and Thoughts

I wrote an RPG called The Pool back in 2001 or so when I was a regular at The Forge. Ron Edwards promoted the game through discussion because it was among the only games at the time that explicitly explored what I would call shared narrative control. That is, an RPG in which the GM and the players both have some authorship of the game's shared creative space. The Pool allows for this by controlling the creative powers. That is, it has rules for who gets to author and when they get to do it.

Anyway, the game has enjoyed a lot of discussion over the years and I'm proud to have created it. I'm glad that it might have influenced other designers to create even more impressive games. Because frankly, nobody creates anything new. I certainly don't. I'm the guy who assimilates ideas over time. I hear or see something that leaves an impression and it eventually shows up in something I create. The more impressed I am by the thing, the more obvious it is that I'm channeling it. That's why people often comment that my art reminds them of Vaughn Bode or Richard Corben.

Anyway, here's a video of Ron Edwards talking about The Pool to a class inMilan. Strange, but true. And very cool!

And the game itself got a tiny facelift recently from my friend MattHildebrand who put it into a printer friendly digest PDF.

I'm working on a new game. For the past few years I've focused 100% of my efforts on doing OSR material, which I dearly love. But in January I had a bit of a break from it as an OSR project I was working on kind of fell apart in my head. Possibly this was more related to my mother's health problems and less to gaming. But still, it caused me to step back and start looking at all my junk. Which caused me to flit back and forth between projects. And now I'm at this place creatively where I have an old, potent idea I'd like to explore for a time. It isn't OSR. It's also not a story game. But it does have elements of both those modes of play. Again, this is just me doing what I like to do and not thinking too much about it.


Hell, I don't even want to say what it is because tomorrow I might abandon it. I'll say that it grew out of working on an updated Rabbits &Rangers, but it is not R&R. More later.
Posted by James V. West at 10:21 AM No comments:

Meandering Commentary on Dwarves in My Campaign World

I was never a huge fan of dwarves. Or at least that's what I said. But when I started peopling my gaming world of Yria (Old Gnarl) I quickly realized that I must love the bearded bastards. When I ran my first Labyrinth Lord game dwarves turned out to be a key component.

The western mountains are the Rock Hardies and those are populated by redneck dwarves who love to fight. Each mountaintop is dominated by a clan and the clans stage elaborate battles with one another over unclaimed hills and mountains... or just for fun. Dwarves here, a place just south of Frimmsreach (where the Ice Forest would be found), have names that are fun to make up. Here are some names of dwarves that appeared as NPCs in my first LabLord campaign: 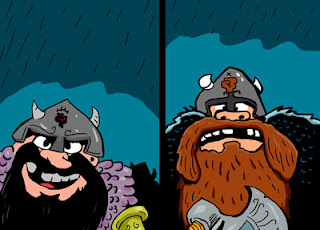 Brickwallow Stormshot was the leader of the dwarves. I think only 1 or 2 of them were still alive by the end of it, but there was a cool episode in which the party's dwarven cleric, Frothgar, summoned the slain spirits of this party of dwarves for an epic battle against an army of trolls and giants.

Now, the eastern dwarves dwell in the great Lightning Spires, a range of thunderous mountains that dwarfs the Rock Hardies (pun intended). These are your aloof, snotty dwarves. They have high standards. They have culture and learning and are exceedingly concerned with craft and tradition. They don't actually interact much with the rest of the world and thus I have no fun things to say about them. But they would have names like Dalan of the Silver Sky or Myyra the Masterworker. None of this Doorbreaker bullshit.

On my good days I think about doing a comic strip series to explore the world of Yria. And in fact I've stuck my toes into that water more than once. Having done a lot of comics and comic strips over the years I'm stymied by one great obstacle... comics are a lot of work.

Seriously. If you know a person who makes a lot of comics or manages to do a "regularly scheduled" comic, you need to give 'em a big hug. If you are that person, here's a virtual hug: [hug]. 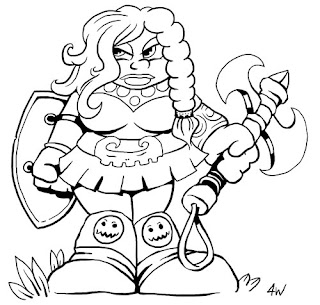 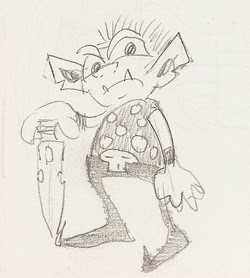 You are a green-skinned black-heart. You are about 3' or maybe 4' tall and fifty pounds soaking wet. Your people are known for murder, mayhem, and cannibalism. Maybe you are different? Maybe not.

You can use any weapon except those requiring two hands (they're just too much). You can wear any kind of armor that fits you (steal some halfling bits if you need to). Adorning your duds with skulls, bones, and symbols of evil makes you feel tough (+1 to hit and saving throws for 1 turn per day, per level). You make saving throws and attacks like a thief.

As a creature of the darkness, you ain't scared. You gain +1 to save against Fear spells.

You have sneaking skills. You can burglarize non-magical, non-fortified abodes such as houses and cottages.

At first level, you must choose 1 of 3 possible goblin paths: sneak, sniper, or goon.

Sneak: Add your Dexterity score to all your sneaking skills, including burglary.

Sniper: When using any ranged weapon, add +2 to your hit rolls.

Goon: You get +1 to hit and damage in melee.

For the last two years I drew the GM's tee shirt for Gary Con. I'm very proud of this and I hope I get a chance to do it again. I'm honored to bring a little something to the con, even if if attending it is extremely difficult for me to do. 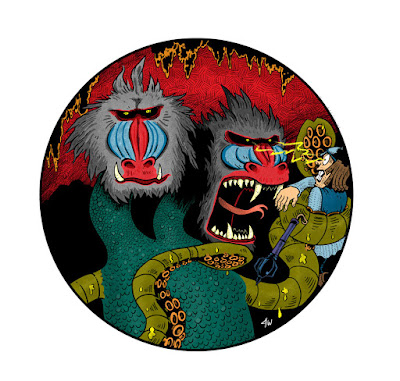 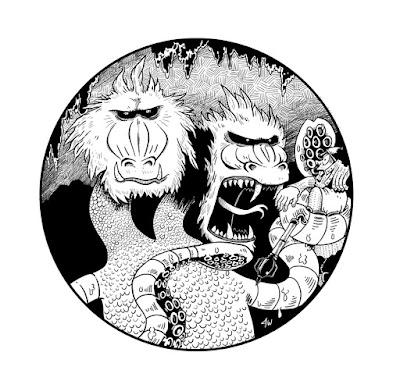 Did I mention Black Pudding #2 is available in PDF or print? 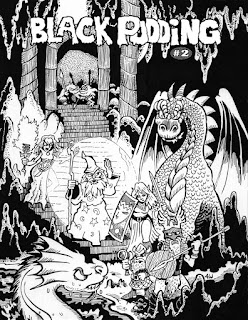 Through my life I've published a lot of books. Mostly little zines and comics. My earliest memory of doing this is roughly 1980-1982 when I was between 10 and 12. I folded pieces of paper in half (digest size) and drew comics on them, stapling them together if they were more than a single sheet. It was always some Marvel character like Spider-Man. A few years later, as I got into RPGs, I created one-sheet adventures inspired by D&D and Fantasy Forest (remember that boardgame?).

I don't have any of those anymore and only a few of them ever manifested. But that was the start.

Later, in high school, I teamed up with friends and made "proper" zines that we photocopied at a parent's workplace (stealthily on the weekend) and sold at school for 50 cents a copy. That was Fast Lane Comics, and it started me down the path of comics and self publishing that persisted steadily through the 90s and the whole Factsheet Five era. In the 2000s I transitioned more to RPGs, which I had been doing all along but not publishing. And in 2012 I dived into OSR stuff.

This pic is all the stuff I've published into print since connecting with the OSR and embracing my RPG passion more fully. I'm proud of this work and I want to do more.

Right now, I've got Black Pudding #3 and Doomslakers Adventures #3 both on the drawing table. Other projects, such as Dead Wizards and Rabbits & Rangers RPG, are stewing on the back burner.

As an aside, it would be a real brain explosion for me if I could gather up all my various printed junk from over the years. I doubt I have 50% of it in my collection as I'm a TERRIBLE HORRIBLE archivist. But to see all of it gathered into one photo would be pretty neat. And scary. Probably really god damn scary to be honest. I mean... holy crap now I'm remembering projects better left forgotten...