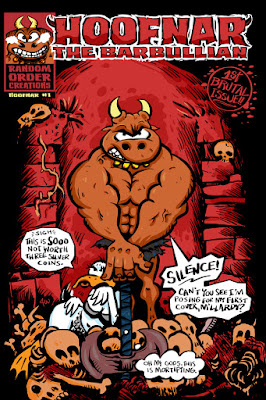 The age of beasts, witches, and sorcerers! A time red in tooth and claw! Witness now, o traveler, these tales of daring deeds and hirsute heroics. Truly these are the days of furious four-fingered adventure!

Hoofnar is a comic character I've been thinking about for a few years. Probably posted about him before. I did this cover mock up in a moment of inspiration. Maybe this might lead to an actual comic book? I do love my funny animal comics.

NOTE: I actually have no memory of how I ended up with two distinct comic book character ideas that are reddish-skinned, horned adventurers. Zarp and Hoofnar are vastly different in tone, but have certain shared traits. In fact, all my Hoofnar art prior to this cover shows him with very red skin and I labelled him a "red bull". I moved to a brown skin here to distinguish him a little bit more from the skinny little devil character.
Posted by James V. West at 5:27 AM 1 comment:

I've been thinking a lot about this little red guy. I started to say "red devil", but I never actually said he was a devil. In fact, none of the published comics every stated in any way what Zarp actually is. Nor does he comment on the matter, as far as I remember.

The character has always been a simple vehicle for telling stories. He's a guy who sees things and whose nature is to explore, wander, and - to some extent - comment on his world. I stopped doing Zarp stuff a long time ago but always wanted to come back.

Today I looked at the visuals and thought about the simplest element of this idea. What does Zarp look like? I found that my art has a wild range of quality on the subject. Some of my earliest Zarp drawings are just shit. Just complete shit. But others are really cool. The sheet pictured here shows the really cool Zarp images (just the heads) and it captures what this guy looks like. I added new doodles to make sure I knew what the hell I was doing when I draw him. Because one of my weaknesses as a cartoonist is that my forms meander too much. I don't define a character's look explicitly before I just start drawing, and that often leads to a visual drift that, in hindsight, is unfortunate. 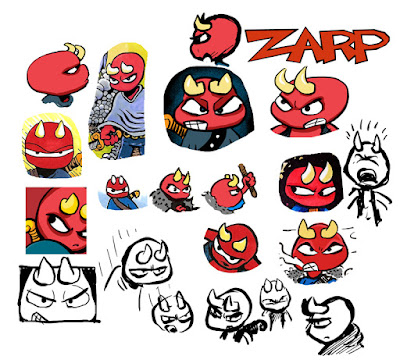 I put together a bunch of reference sheets for my own OSR house rules. These rules are generally based on old D&D such as the 1981 version by Moldvay, Cook, and Marsh (B/X). But also on Swords & Wizardry White Box. This is incomplete, but since I am pausing this project for a bit I figured I'd share the whole current series for those who might be interested. Roll some dice! 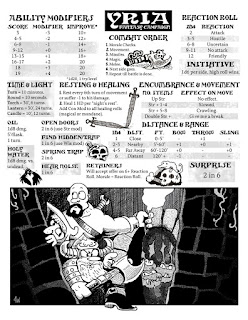 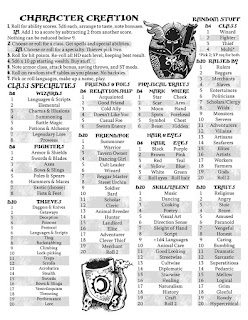 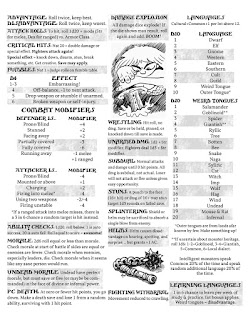 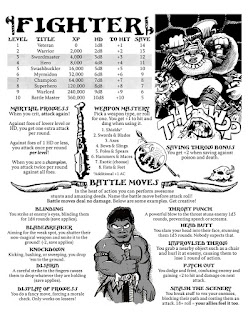 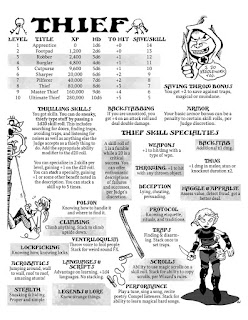 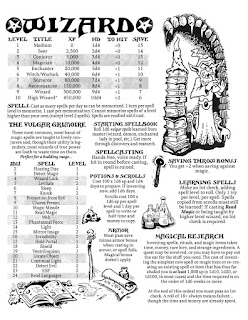 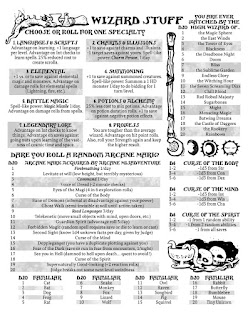 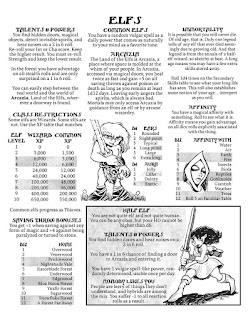 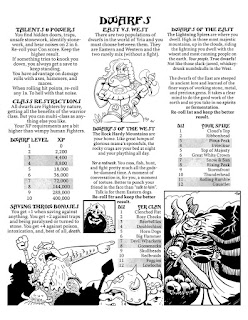 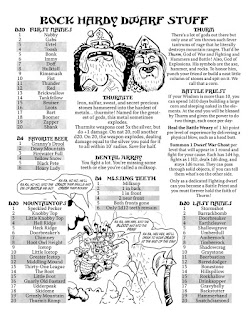