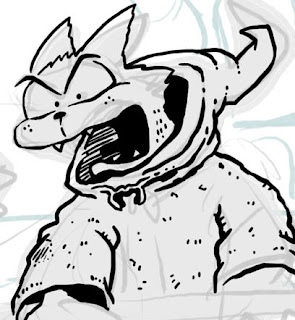 Oh... I guess that also means I'm working on a new R&R. Not sure if I posted about that yet. This is a standalone RPG. I started with basic OSR and I'm building from there. But more on that later.
Posted by James V. West at 7:32 AM 15 comments:

Update on Life and Thoughts on Rabbits & Rangers

Since my last post I've been struggling with family health issues. My mom is sick. She has liver disease and diabetes and lots of complications as a result. She's doing "ok" right now, but it's always tentative and I'm in fear of the worst. So I've been a bit flighty and only sporadically productive.

I did manage to start my Dead Wizards campaign, though it was in the middle of all this personal stuff and I haven't given it the tender care it really deserves.

What I have been thinking about lately, in the creative realm, is Rabbits & Rangers. Specifically a standalone RPG. I'm quite proud of the book I created in 2016, but I've always wanted this to be a game of its own. Here's what I know right now.

• It's going to be OSR. Possibly a clone of B/X, with animalized changes.

• It'll have 100 animals instead of 50. The babirusa and pronghorn have already joined the ranks, along with a handful of others (horse, lemur, etc.).

• I hope to publish some modules/adventures for the game as well. I have a big fat list of ideas, many of which are parodies of existing modules. Last year when I playtested the rules I ran Sheep on the Borderland and Castle of Count Drake-Yulla... so those need to be written up and published for sure.

• The possibility of a Kickstarter is on the table. But right now it's only a distant notion, not the actual plan. I include this as an option in my planning because I'd like to see a nice physical book I can provide that would be a step above print-on-demand. We'll see how things shake out first.

I have no timeline for this. There's far too much work to do before I get there. It might be a summer thing or it might be a 2018 thing. I don't know yet. But it's probably going to be a thing.
Posted by James V. West at 11:05 PM 1 comment: