My car is pulling to the right. Tires have weird wear patterns. My front end is waaaay out of alignment.

Oh... wait. This is about gaming. So it's not that kind of alignment. Sorry.

(Come to think of it, I haven't even thought about front end alignments since I bought my first new car in the 90s. What was it about older cars? My old AMC Spirit was constantly out of alignment.)

Alignment sucks. I said so in this post, and I still mean it. You don't need alignment in D&D games. You might think you do, but actually in fact you absolutely do not. So ditch that shit right now. Of course, as I said in that other post, alignment is actually useful in other iterations of the game, such as DCC RPG. In that game alignment is both fun and useful, unlike in D&D where it is constraining and pointless.

Here's a newsflash: orcs are a racist trope. Indeed, it's true. The arguments for this are pretty solid and I'm certainly convinced. But also... who cares? It's really not a big deal. Orcs are dumb and boring anyway, so fuck 'em. Make your orcs more monstrous, less like Mongol hordes, and maybe that will fix it. I don't know. And I kinda don't care. But yeah... the racist trope allegation does hold water so stop bitching about it.

More importantly is the drow thing. It's quite god damn clear that having your prominent black skinned race of people be inherently evil is kind of a problem. This has been known for decades. Hell's bells, I remember joking about this shit in high school. And that was the 80s, when racism was just How Things Were™. I'm happy that WotC is addressing this problem, and the orc thing as well. It's a net good.

Stop bitching about it. They're trying to sell the game to young people, not our old asses. 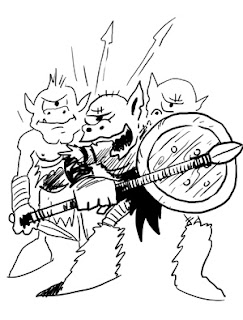 Alignment in D&D is stupid and boring. Get rid of it. Or use it like DCC uses it.

The orc and drow tropes are kinda racist. Deal with that. You can still use orcs and drow if you want and if anyone tells you that you're being a racist you can say "Fuck off". It's fine. But honestly... orcs are boring so fuck 'em. Let's come up with new stuff.

EDIT: I just learned that Netflix removed the AD&D episode of Community. One of the best episodes! Fuck the bastards. What a dumb, stupid, cynical move.
Posted by James V. West at 6:41 AM 6 comments:

Here's a drawing I did for Phantasmagoria #3... the menacing mangrel will mangle your head! 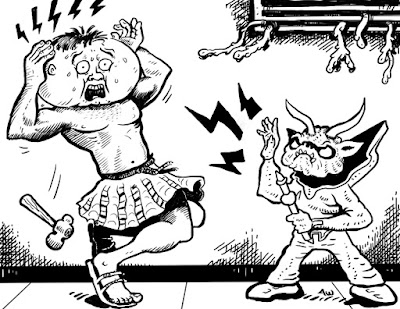 Here's a rejected alternate version with darker background. I kinda like it... but maybe its too many lines. 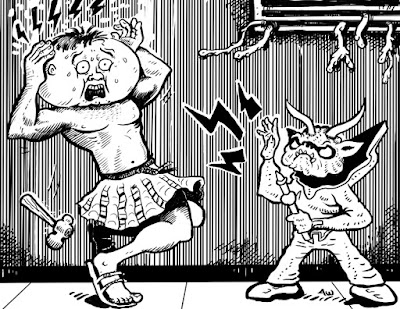 Here's a character sheet I drew for the most excellent DCC RPG zine Phantasmagoria! You should check it out. I actually quite like how this one came out. 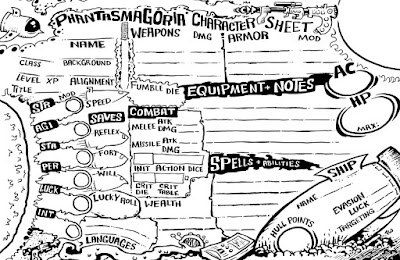 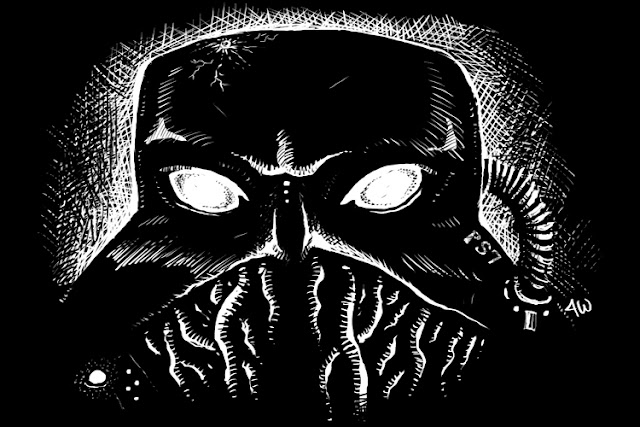 After much pondering and noodling and doodling, I finally decided that my robot game idea is really multiple ideas and one of them is a Troika! based romp kit about robots. And that's what I decided to focus on right now.

So, Cozmic Metal Heads will be a 48 page follow-up to Supercalla, set in the same universe and referencing some of the material in that book. This is in alignment with my original idea to create a series of these things all set in a universe known only as the Cozmos, or the Coz for short. I've been working on it pretty relentlessly these past few days and making excellent progress. Right now I'm neck-deep in writing the d66 Robot Models (Backgrounds). And, of course, finishing the robot art.

The deeper ideas I had for this are obviously going to make it into some other project later. I have ideas about how being a robot character means you can truly transform yourself over the course of a campaign. How would adding a shoulder canon alter the very nature of a robot designed to be a diplomat? I think that's fucking interesting.

I am not sure I'll dive into any of that in the Troika! book. Keeping to 48 pages with 36 robot models will be tight enough. 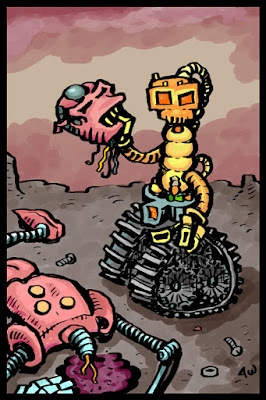 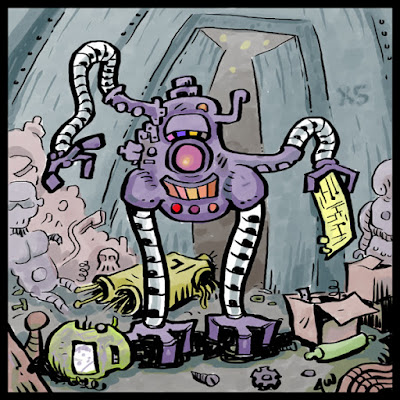 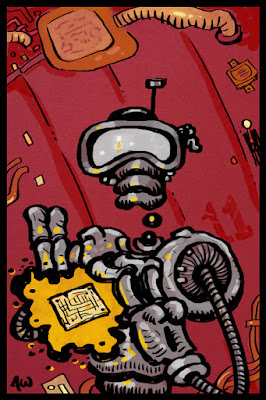 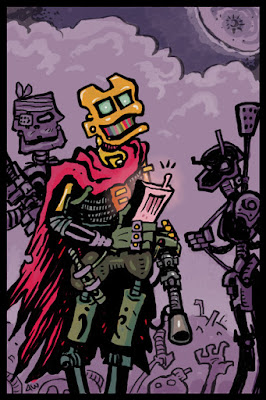 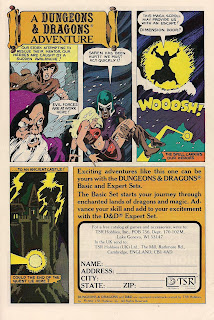