Years ago I did a comic book called Pan-Gea. The book was published by Ape Entertainment as that company got up and running. It was a good one, I think. I followed it up with another Pan-Gea comic called 7 Arrows. These are all available at my website.

Anyway, in the spirit of #finishit, here is another Pan-Gea tale that has been lying around for about 10 years. It isn't my best work but it's a succinct little tale and I might as well put it out there into the world.

The character has a name but I choose not to utter it. She goes way, way back for me. She was my first serious D&D character.

Enjoy. And finish your projects, you lazy bastards. 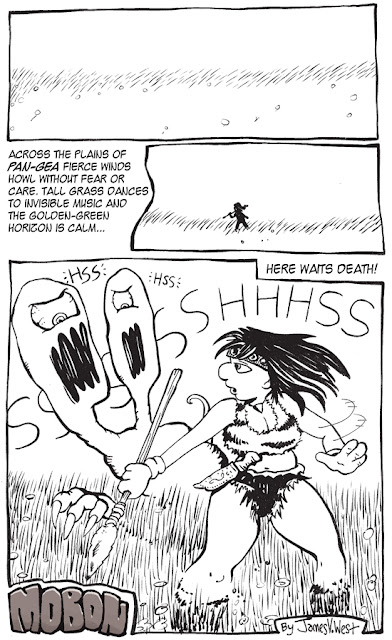 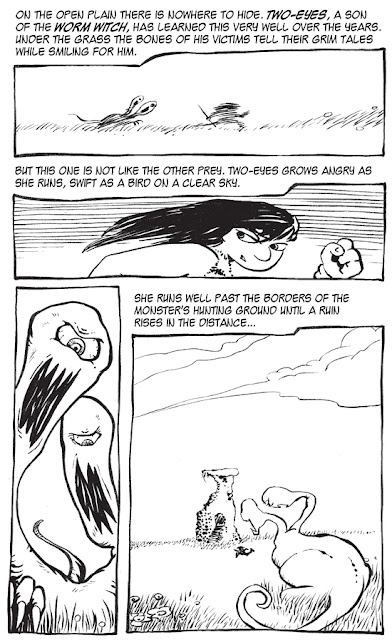 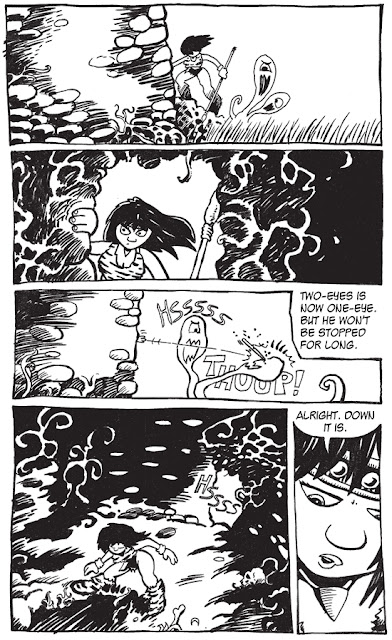 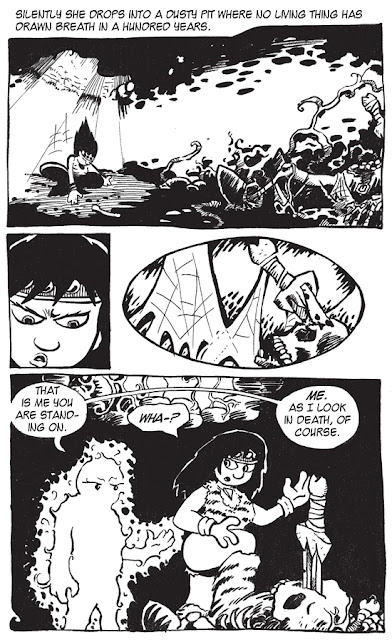 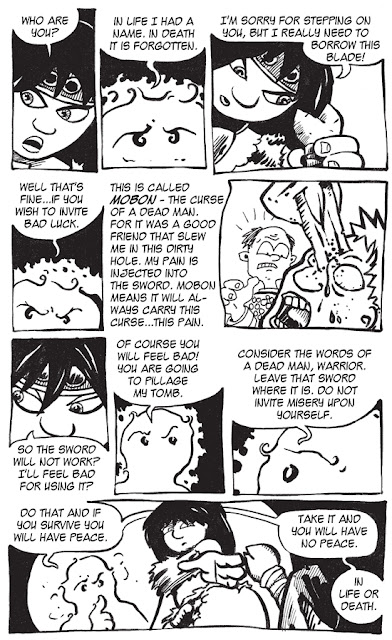 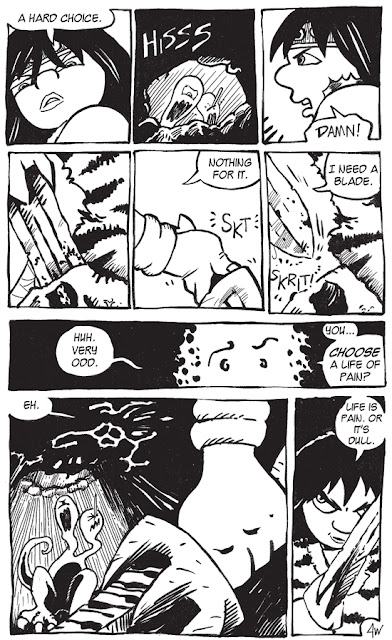 This is what happens when my kids dominate my computer and drawing area and I'm sitting on the couch with paper, pencil, and pens.

Ostensibly this is for DCC RPG since nearly everything I do is based on Labyrinth Lord and I want to give DCC more love. But of course you can use it however you want. 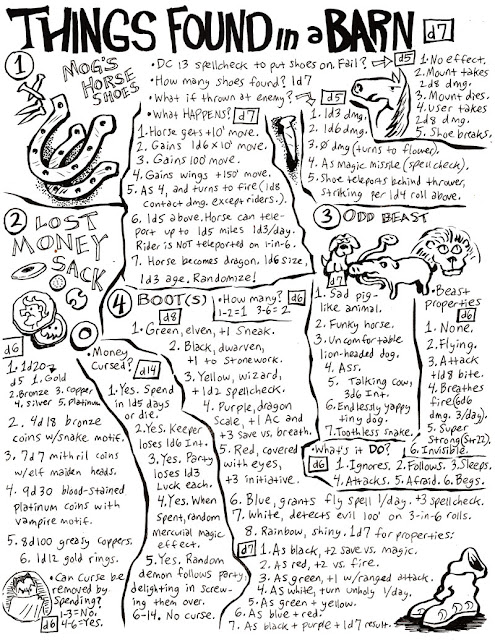 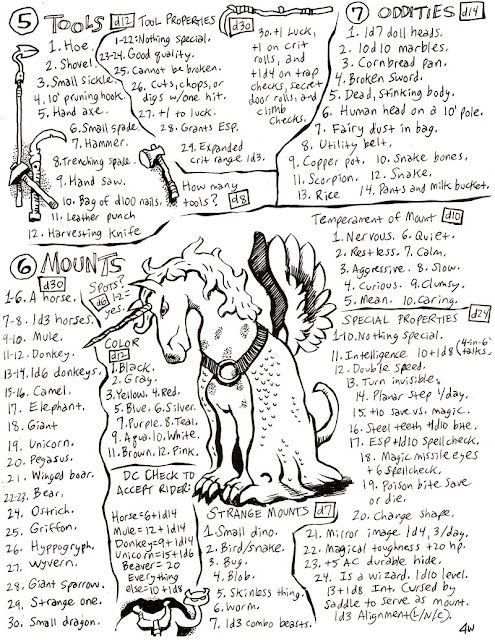 I'm always thinking about how to put funny animals into RPGs in a way that feels right for me. So here's a pass at doing a DCC class based on the ubiquitous chainmail chicken... 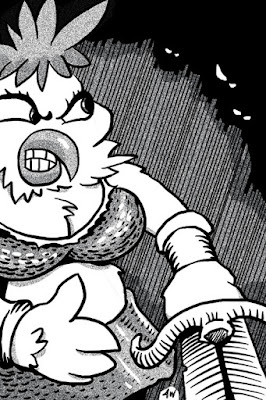 You are no mere seed-pecker, no simple egg-layer. You were born under a brighter star and will submit before no man or rooster. With a hefty blade in your feathered hand you hack, slash, and cluck your way to a heroic destiny.

Weapon Training: You can use any weapon that is common to your place of origin. Upon using a new weapon for the first time you lose 2 die steps on your attack, but this penalty vanishes immediately.

Alignment: You are a free spirit, often battling against an oppressive hierarchy. You lean toward neutrality or chaos but may also be lawful.

Warrior Tricks: As a clever fighter you share the warrior’s Mighty Deed Die and can perform awesome Deeds. You use the warrior’s level advancement table.

Initiative: You add your level +1 to initiative rolls. You are perhaps a little too keyed up.

Aura of Awesome: Something about a chainmail chicken fascinates her enemies. When you issue a challenge to your enemies before striking a blow they must all pass a Will save or be temporarily impressed, suffering a -1d3 to all attacks against you until the save is made or until you take a blow or miss an attack. The DC for this save is your Luck score + Personality modifier + half your level, rounded down.

Flogger: In combat you sometimes go a bit nuts, launching into a wild flurry of attacks that, while awkward and clumsy, can be quite devastating. When you have lost half or more of your hit points in a single fight you can flog. If you do not wish to flog you must pass a Will save vs. a DC equal to the last successful attack roll against you. Only then can you quell the furious anger swelling in your bosom.

A flogging attack must be in melee. During a flogging, you make a number of attacks against any enemies within a 10’ radius equal to your Luck + level. These attacks cannot be Deeds and you do not gain the benefit of a Deed Die modifier, though your Luck modifier must be added to the roll. Each time you miss a flogging attack your Action Die is reduced a die step. These quick, shallow, unfocused attacks deal only half damage. Crits count only as automatic hits but gain no other benefits. A flogging attack lasts one round. Your AC and next attack roll are reduced by 1d3 for one round following such a frenzy of blows.

Feathered Faller: You can’t fly but you do have feathery wings. For every 10’ you fall up to 100’ you may make a DC 10 Ref save to avoid all damage, applying the appropriate check penalty based on armor worn. If you are carrying an excessive amount of equipment the Judge should assign a check penalty for that as well.


Peryton FRPG by Christina Lea. I bought this for two reasons. First because Alejandro Gutierrez Franco did the cover. Second because it is an example of a complete game in a fairly small package (144 pages), which I like.

I didn't realize this was a 3x OGL clone until I got it in the mail. That's fine, but I was hoping for an original system. I probably didn't read the description fully.

The layout is clear, fonts are big enough, and the art is ok throughout. The cover is great, of course. So overall the book itself is about an average product.

The system is stripped down 3.5. Simplified nicely into a tight package. I noticed that it has an XP system I have toyed with myself. Basically you earn and spend XP to level up 1:1. So getting level 5, for example, costs 5 XP. However, the text says you earn XP for doing amazing things such as winning an epic battle or solving a tricky puzzle. It seems to me that if you give XP for each successful challenge the party would be hitting new levels very quickly. Perhaps that is by design. A GM could slow that down if they wanted a longer campaign or keep it as-is for more rapid advancement.

Overall, I'm not disappointed with the book though I'm also not blown away. It's good. It's tight. If you want a simple and complete modern D&D style rules set that is inexpensive this will do the trick.﻿ 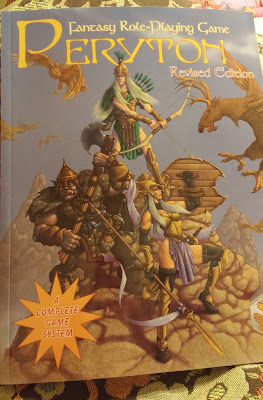 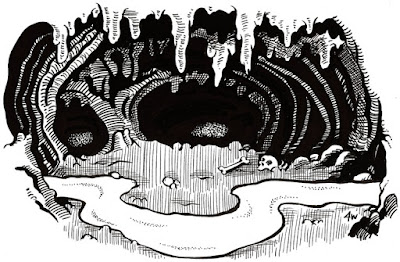 I'm usually thinking about BX or Labyrinth Lord but lately I've had DCC RPG on the brain. I've been running it with fair regularity since I bought the boss wizard cover rulebook in 2013 (2014?). I guess all told I've ran about 30 sessions with maybe 6 or 7 of those being funnels. Among the official adventures and third party adventures I've ran Sailors twice, Hole in the Sky, Portal Under the Stars twice, Escape From the Purple Planet, Ruins of Ramat, and one of the Sunken City adventures. All great fun!

Right now I'm in the middle of a campaign for my local group and they all just hit level 3 after finally escaping the Lost Pyramid on the Purple Planet. I basically took B4: the Lost City and molded it into a Purple Planet adventure. At first I was just subbing kith for the various factions but very quickly I took the whole thing in my own direction and abandoned most of the content of B4 and most of the Purple Planet material. I used B4's maps and invented a death orm cult lead by a half-kith-half-human priestess (with no actual powers) who the players slew in the last adventure.

The orm they worshiped was a well. It looked like a well, anyway. It's mouth was the ring and its gullet the shaft. It required greenstones to animate and upon animation it could potentially be controlled by a powerful enough wizard making a good enough spellcheck.

The party wizard, who is well known for hiding and not casting spells, managed to gain control of the orm after replacing the last greenstone. The orm turned out to be the mysterious "Ship of Stars" and could navigate the astral plane, taking the PCs as passengers. Thus they were able to make it home.

Upon reaching home the orm was in its death throes, being an ancient and weakened worm. But the wizard scored a nat 20 on a check to regain full control and managed to steer the dying beast to the ground without the DC 15 Ref saves I was going to require to avoid the 6d6 points of damage from the inevitable crash. 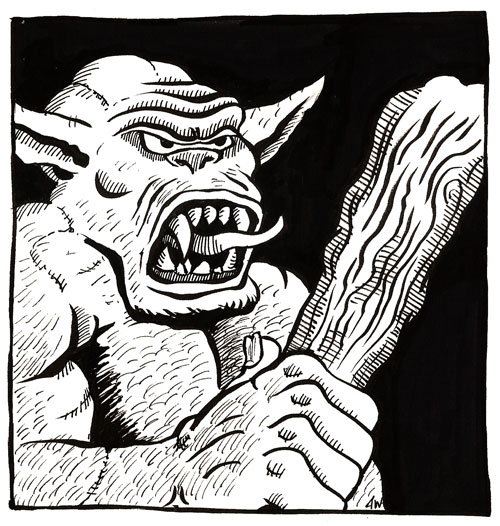 Owl of the Deep

For Andy Solberg's upcoming Tomb of the Feathered Mage module for OwlCon. The owl of the deep! 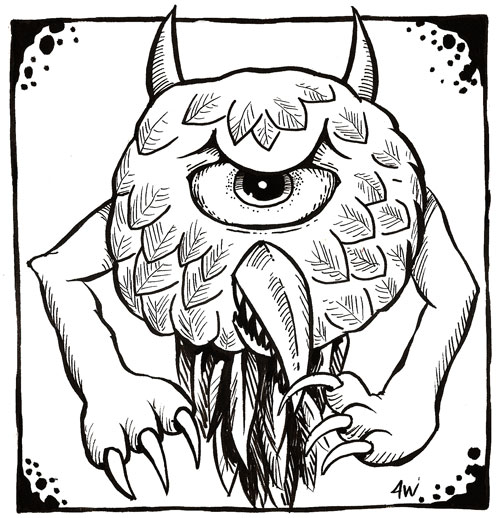