The RPG Folder from Heck

It is once again time to crack open that folder of unsorted RPGs, randomly select a few, and dash out some thoughts about them. Just like in the days of old. 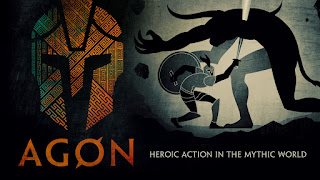 AGON by John Harper is a game about poor Greek bastards serving the gods in an endless divine war. This game looks pretty focused and themed. The layout is landscape, everything looks pretty good. It's one of those games that takes its time but doesn't seem to meander. We don't get an intro until page 8. It's a game unafraid to give you multiple pages of pictures and quotes to prime the pump.

So right off the bat the game sets up a clear purpose for the game - heroes (players) must gain glory by winning fights and contests. They must also carry out the quests given them by the gods. Players are explicitly in competition with each other and the GM (the Antagonist), trying to out-awesome each other. But also they are part of a team working toward the goals of a god so they must work together. That seems like a nice tension.

The mechanics are elegant. You have stats ranked by dice. Bigger dice = better stat. When you have a contest, you roll some dice. Whoever has the die with the biggest result wins that contest. I like it. Seems like a quick way to resolve conflicts and is well-suited to playing in person at a table. Makes me want to revisit ideas for dice pool systems.

So the whole thing takes place in a fictionalized ancient Greece with gods and monsters where strong heroes duke it out or have fantastic contests of a - shall we say - Olympic quality.

I would play this.

Side note: I recognized the name John Harper because you can't toss a stone in the RPG sphere without running into Blades in the Dark, another game of Harper's design. This guy is good. Watch out for him. 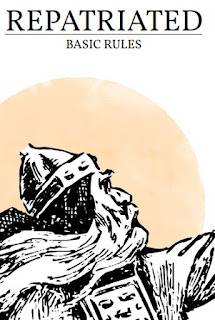 Repatriated by M.A. Guax is a pamphlet game, so it is minimal in nature. The Basic Rules are 2 pages.

It says it is a game about being exiled to a forbidden land that belonged to your ancestors and that you have some kind of divine right to claim it. There isn't much here in terms of explanation or guidance. There's no discussion of how to create such a setting or what you're supposed to do in it.

The rest of the game is rules for survival and task resolution.

This is a weird one. The design seems fine. You have a few attributes and some vulnerabilities: Hunger, Pain, and Stress. All dice rolls are 2d6 vs. your vulnerability.

The game isn't listed on the creator's page as far as I can tell so I honestly don't know how I got it. Maybe it was up for a time but taken down? I don't know the history of it.

Fireball by Łukasz Kołodziej is "An Old-fashioned Role-Playing Game" published under a Creative Commons license. This game appears to be a basic fantasy adventure game covering similar ground as D&D. It only uses d6s.
When you create characters you roll some d6s and your lowest result determines your species while  your highest roll determines your character class. Each roll is placed on an attribute such as Strength or Agility.
There's a neat little quest generator where you roll some d6s and you can get stuff like "go to a dark forest that has been attacked by trolls to repair a stolen strange machine". Kinda cool. I really dig random generators.
When you have a conflict, you decide what the stakes are. You can say some health will be lost or an item will be lost, etc. Then each side of the conflict rolls 1d6 and adds their attribute and skill. The lower roll suffers the predetermined consequences. Interesting, deciding stakes before rolling and not just assuming each conflict will be about killing each other.
The game is super simple and intended for fast play. To give you an idea of how simple, the wizard has 3 spells. Oh yeah... it's also free.
Posted by James V. West at 9:17 PM