The RPG Folder Was Too Hot 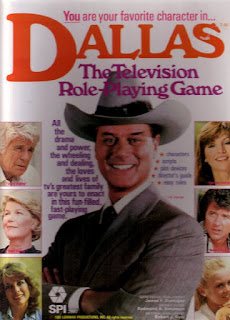 Dallas: the Television RPG: I snagged this by way of piracy out of pure curiosity. I needed to understand. I was largely underwhelmed by it but hey... what did I expect? An incredible storytelling revolutionary RPG that somehow nobody is talking about? Nah.
The game is bland as all hell, like many or most early RPGs. This came to us in 1980, a mere 6 years after the publication of D&D. So at this time a person with a little bit of pocket money could own all the RPGs in existence and actually play them. Wild, huh?
This game is about Dallas and nothing else. The rules are fairly simple. Everything is framed as episodes with scripts (script = adventure). Mechanics are kind of interesting. You have a few stats such as Coercion and Persuasion, which have two numbers. The first number is your strength and the second is your resistance. To see what you need to roll in order to Persuade someone, subtract their resist number from your Persuasion strength and roll under that number on 2d6. Kind of cool, but perhaps we could have come up with a slightly simpler way. Still... this is 1980 and at least the designers were experimenting.
For pete's sake, this game doesn't even have any combat rules. That is a HUGE departure from virtually all other RPGs of the time. All of the game mechanics are about social interaction, mostly negotiations. Which... makes sense, given the subject matter.
It is an object of it's time. The writing is just yawnworthy, like many older games. No flair. Nobody expected flair, I guess. Just stereo instructions.
I kinda wanted to play this but now I'm thinking not really. No shade intended. This was a cool experiment and I applaud its existence.
Feral RPG: Character Samples 2.0: By Jez Gordon. 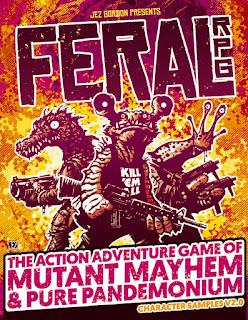 I have seen Jez' work around for years but haven't really interacted with them nor closely followed the work. Which is weird because look at this cover and tell me this isn't my jam? I love it.
Honestly though I've seen Feral RPG stuff for years I just didn't know what it was. Seems that it is compatible with D&D 5e and you play mutant critters in a punk mutant future world. Cool. The word "gonzo" definitely comes to mind.
This book is a collection of characters and their awesome character sheets, such as Jimmy the Thing and Nyuk Nyuk the Knife. I have heard of this game project for years but I don't remember ever seeing a finished book. Check the website to see what's up with this awesome jam. 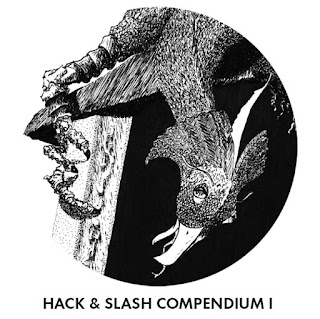 Hack & Slash Compendium I: by Courtney Campbell.
This is a collection of blog posts by Courtney. The art is by Courtney too, including that delicious cover. Not much to say about it because I haven't read it all but this is indeed where you can find the famous quantum ogre. 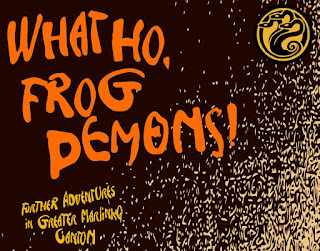 What Ho, Frog Demons!: By Chris Kutalik and Luka Rejec.
Another famous book that I have managed to not really look at until recently, despite the fact that I am a huge fan of both Chris and Luka. First, the cover is lovely, as expected.
This book is based on Labyrinth Lord, like all the other Hill Cantons books in Kutalik's series. I love me some Lab Lord. I sometimes have a sad because the wonderful Old School Essentials line seems to have killed Labyrinth Lord's influence for now. I mean... how cool is the name Labyrinth Lord alone? Badass.
Anyway... this is a setting book that is relentlessly focused on adventuring. You won't find any tedious boring histories of duchies or wars that nobody cares about. Instead, you'll find gamable rumors and plenty of hex encounters.
Did I mention the maps are by none other than Karl Stjernberg? Nice.
Posted by James V. West at 8:14 AM