The RPG Folder I Caught in the Act

Part of this amazing ongoing series!

How it works: I randomly click on an RPG PDF, check it out, and maybe write a little mini-review. I usually write about it while I'm looking at it.

Oh snap! I clicked on an OD&D referee's screen. And it's a damn good one too. Trouble is I'm old and I don't remember who made it or where you can download the thing. Someone help me out in the comments. Don't hold out on me.

EDIT: StuRat in the comments came through with the link. This is from a blog called Smoldering Wizard. Check it. 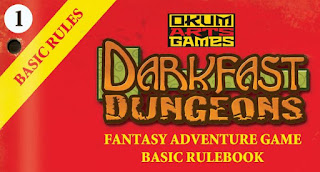 Darkfast Dungeons by David Okum. Man I am such a wank. I love David Okum's paper minis and I follow his posts and Patreon. But I have never really looked at this book. SHAME ON ME.
So first of all, I'm a sucker for anything that emulates that classic TSR trade dress. If done well, it's just delicious to me. It can be stale, it can be overplayed. But anyone who says it is a dead art can suck it. This cover looks good.
Ok, so this appears to be a full game. Again, color me a dumbass because I didn't actually know that. I just thought Darkfast Dungeons was a series of paper minis.
I love that this is written and illustrated by David. I love ventures that are single-creator visions. Now, don't get me wrong here. Obviously there's nothing wrong with collaboration and group efforts. I'm just saying that I have a special place in my black heart for these kinds of singular vision projects.
This one appears to be compatible with or based on other games of David's. Interesting. It's definitely inspired by the classic 1981 D&D game. Natch.
Nice looking character sheet. Cool art, of course. I wanna play a Corvian.

Chronicles of the Spacejammer! by Richard Ruane is one that I just don't remember picking up at all. I might have snagged it on a bender* and never opened it. It's a book with 36 space-based backgrounds for Troika!, the other world's favorite RPG.
So this appears to be something that fits snuggly into Troika!'s aesthetic, which is kind of spacejamming to begin with. Just spot-oogling these I find the Chronomancer's Ex to be interesting. A person who hopped a ship with a chronomancer, ended up in a bad relationship, broke up, and is now kind of wayward in the stars perhaps trying to make their way back home.
Isn't that wonderful? This is the power of the game's backgrounds scheme. It's world building and character building all rolled into one. Not much more to say about this one. It's literally a book of 36 backgrounds. And they all seem pretty damn cool to me. 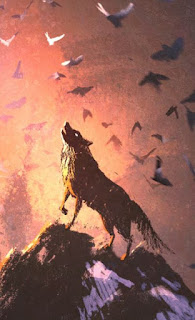 Legacy: Life Among the Ruins (2nd Edition) by Minerva McJanda and Douglas Santana Mota. Hey it's only 55 pages! I might be able to say more about... oh no... that's just the handout document. The main game is 305 pages.
So this appears to be a post-apoc game, judging by the cover. It's a nice cover, I dig it. The art by Tithi Luadthong is pretty dope. Oh... hey. This is published by Modiphius? Huh.
Oh, ok. This is Powered by the Apocalypse. So the mechanics are gonna be similar to many other PbtA games such as Dungeon World. You know, to this day I don't actually know the rules for these games. I've read some bits and listened to a bunch of podcasts about them but I haven't quite grokked the concept entirely. Here's my uneducated idea of what they are: You have character abilities, called Moves, and you roll 2d6 when you want to use one. If it's like 4+, you did it. Or something. I know it's not that simple. There's a range in the middle that is "yes, but". I dig it.
Anyway... the game has a decent look. I don't love it. I think the artist is pretty rad and lots of the art is killer but a lot of the art in this book has the look of photo-manipulation - which is not my cup of tea. It's a turn off for me. But it does capture the post-apoc future world vibe so maybe you'll love it.

Colours of Melestrua: Ragnar's Keep by Ian Brockbank is a setting for RPG adventures in a working medieval castle. So this guy's name is Ian and he says "games master"... I'm betting this is a British publication. I'm so smart. I guess the spelling of "colour" didn't give it away. I love the Brits!
This is what it says on the tin. It's a very detailed castle with lots of rooms, all of which are described. There are some drawings of the castle and maps for each level plus the cliffs and river around it. There are detailed descriptions of the castles' important occupants plus their 5th edition stats. Overall, it appears to have everything you'd need if you are into historically accurate medieval gaming. Which, of course, I am not. So I am a terrible judge of this book.
The trade dress is nice because, I think, it is an aesthetic callback to old RPG resource books such as Harn and Role Aids and others. I'm probably wrong on that, but it strikes me that way. Actually, now that I think about it, this reminds me of a 90s RPG resource book akin to ICE's Campaign Classics.
*Aside: I use "bender" casually to indicate some event where I spend all day making memes or listening to obscure 1982 metal albums. But it dawns on me as I type this that "bender" might be a term fairly exclusive to heavy drinking. I don't know. I don't mean heavy drinking, for the record. My heavy drinking consists of 2 tequila sunrises on a Saturday night.