I recently completed a short BX D&D romp called Lesser Gods of Rone. Well... the campaign is called that, but this was just one adventure. Let's call it The Sleeper.

Here in these posts I talk about this whole island campaign concept:

The game ran for 7 sessions of 2 hours each. The characters were searching for the father of the party's wizard, Vonz. Vonz' dad had allegedly joined the crew of a wizard's ship in search of an ancient treasure. They explored 3 islands and ultimately had a standoff with a wizard who was locked in mental combat with a giant monstrosity beneath the waters. In the end everything exploded, like it does.

One of the main ideas behind this setting is that Lake Rone isn't mapped. It's amorphous. The positions of islands are not rigidly fixed. Or rather, the physics of space isn't fixed. To navigate between two islands you need to understand the path and it's not linear.

I invented a Mariner class just for this setting. Their trick is they "get it". They intuit the ways of the Lake and they are privy to secrets.

I tried to make navigation procedural in the tradition of basic D&D. You roll a die to determine how many hours a journey might take. You roll every 4 hours on a navigation table to see how well you're doing. The journey could become shorter or longer and hazards could be encountered. For example, in The Sleeper the PCs ran into a magic whirlpool created by some underwater villains. This was a fun bit because it let me introduce a little bit of the lore of the Lake to the party that they might later revisit and unpack.

I feel like the navigation rules worked pretty well. I worried that they would become tedious but I feel like with some variety in the tables this would be fine, not unlike the various procedures used in most hexcrawling campaigns.

The idea is that you would island-crawl. You'd randomly determine an island, then explore it. From there you might randomly visit another or the DM could establish detailed island locations as desired. It allows for individual islands to be highly detailed and mapped, if that's what you want. But the Lake itself would never be mapped in that way. 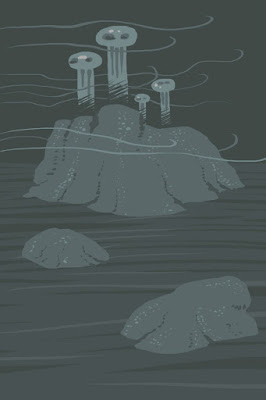 Drawing the islands is fun. I will do more. I'd like to publish them eventually as a deck of cards where each card simply shows the image on one side and has some simple details about the island on the other side. Name, key features, inhabitants, special stuff. We're talking bullet point lists, not much text, and no stats. So this is utterly system neutral.

Accompanying the cards would be a PDF with the rules for navigating the Lake, a few classes such as the Mariner and Lake Thing, and maybe some new monsters and spells. A simple, short thing written for BX (OSE) rules, free to download.

That's the idea. I don't know exactly when I will do it. My habit is to back away from a project after running a playtest and give it time to stew. We're in the stewing phase.