We had session zero of Lesser Gods of Rone Monday night. We spent most of it making characters, discussing the setting, and sort of figuring things out. We got into the adventure for about half an hour - long enough that all the PCs are now in the same boat. Literally. Except the Lake Thing swimming near it.

We do have a Wizard in the party, so here's that character class. It's essentially the BX Magic-User with a few tweaks. Unless we run into any serious issues, this class will replace the MU in all my D&D games.

What's different about the Wizard vs. the BX Magic-User?

-Penalty to reaction rolls. Because wizards are weird and nobody should trust them.

-Fewer weapon restrictions. Because it's silly to limit them to a dagger. Just silly.

-You can wear armor, but it makes casting hard. Because it's more interesting that way. Most PCs will avoid it because of the difficulty. But hey... maybe you want to put some on because you're out of spell slots and you need to make it through this risky pass.

-MU and Cleric spells. This is just because I am not using Clerics in this campaign. Cult leaders can be Wizards. Or a special class. I never liked the basic Cleric anyway. (I'm also disallowing the memorization of the same spell more than once. So even if you do have a Cure Light Wounds spell you only have one of them.)

-Potion brewing. With an adequate lab, of course.

-You begin play with a cool item. Because it's more fun that way. Show up on day one with a hat that sings.

-Disregard for spell level slots. This is just a house rule that I prefer. You just add up all spell slots and that's how many spells per day you can cast. You can't cast any spell level higher than your class level. Done.

This class was an amalgam of how I tend to treat MUs anyway + some inspiration from Stuart Robertson's BX Witch - one of the most elegant BX classes I found in the OSR circles. I was gonna have Wizard and Witch but decided there's really no need for both when a Wizard class with enough wiggle room can serve nearly all  your wizarding needs.

If you dislike this kind of thing because it makes the fighter less interesting to play, you could just give the fighter some love. I love the barebones BX game as much as anyone, but all of us house rule it. Nobody runs it truly RAW.

So... The party includes a Wizard (Jayne X Praxis), Lake Thing, Medusa (modified Black Pudding version, Dyson Logos), Nightkind (a piece of the night that woke up), and a Mariner (Andy Solberg). I'll post up all the classes eventually.

The Wizard is searching for their lost dad and the Nightkind is accompanying them, perhaps to understand a weird dream power they seem to be manifesting. They got a ride from the Mariner and picked up the Medusa as her island sank into the drink (related to the campaign? hmmmm...). The Lake Thing approaches because someone has been poaching gators from his swamp island and maybe it's this weird bunch in the rowboat.

The session ended with the PCs approaching the island of Knobbybones where a huge harpoon ballista was pointed at their rowboat by some unknown entities. 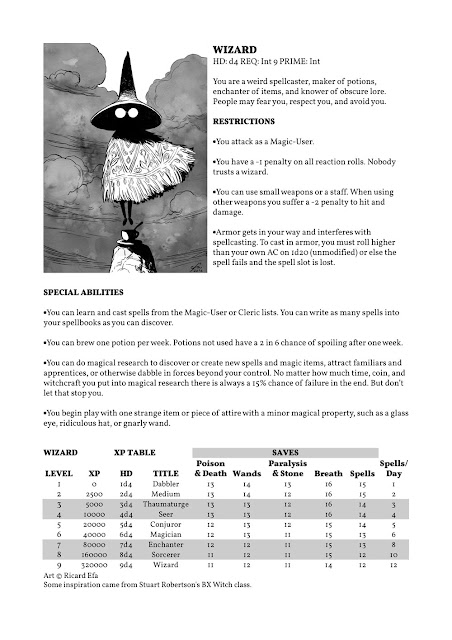