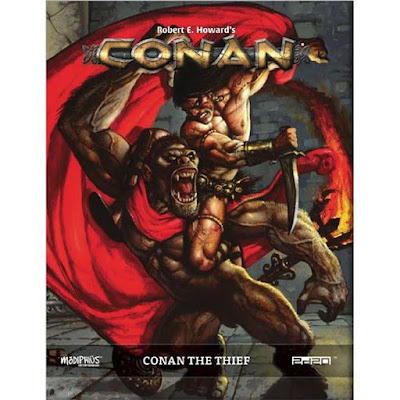 I own several of the Modiphius Conan 2d20 game books. I'm not even sure which ones... like 8 of them though. I have never read them, nor played them. I picked them up because the covers looked sweet and I figured with that much content they're bound to be useful. Also I'm a big Conan fan.

But I don't know. Them's some big ass books. My RPG aesthetic is simpler. I like games that I can hold in one hand. Of course I won't write these off until I know more about them. I did watch a few video reviews and based on what I'm seeing I would say that I might enjoy playing but would not enjoy running this game.

One thing I noticed was they had a Doom pool - which is a resource the GM can use to make things harder for the PCs. I have used similar rules before. I remember drafting a game called Black Wing back in the early 2000s and that game had Doom that served a similar purpose, if I recall. Also my draft of Sand in the Bone features a very similar mechanic. So it's nice to see I'm not alone in thinking this is a cool idea.

Will I ever learn this game and run it or play it? Almost zero chance. But I like that it exists. It looks pretty.