Ten Foot Pole Review of Underground Down Below 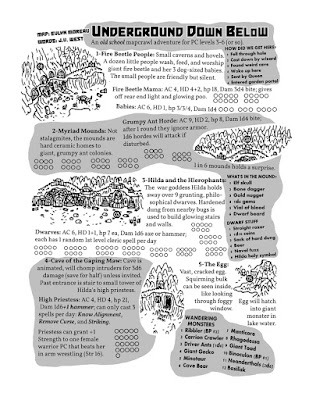 Bryce Lynch over at tenfootpole.org reviews Underground Down Below, the short adventure location from Black Pudding #6 based on the map by Evlyn Moreau.

Overall I'd call this a fair review. The primary criticism they deploy is that the adventure lacks purpose. Why are the PCs fucking with the stoic dwarves? I didn't include that sort of detail, as I normally do not do so in other adventures in the zine. They are almost always setting-based adventures - maps with images and descriptions of what is to be found therein. I drop little bits here and there to connect things, but not much. Mostly it is stuff I fire off on-the-fly. Underground Down Below, for example, was composed on Photoshop canvases point-by-point with connections being made only if the idea struck me and I had room to include it.

I suppose this is because I fell pretty hard into the minimalist adventure design camp when I stumbled into the OSR communities. I always hated modules that had too many words. You're god damned right you heard me. Too many fuckin' words. I wanted to know names, places, contents, stats. Random tables were a plus. Backgrounds, histories, plots? Baggage. Rubbish.

Ok. So I am exaggerating a little bit. I'm not actually endorsing that way of thinking. At least not totally. I accept the criticism of Underground Down Below in Bryce's review as both constructive and useful. Thanks, Bryce.
Posted by James V. West at 9:14 PM