This is the last post in my "old art" series. This was not a comprehensive tour, but literally just me posting the first 30 images in my web art folder sorted by oldest to newest. There's a lot more and I'll be posting that stuff too, just under different banners and at different times.

This one is also very special to me. It's Hella Nor. She's an evil badass. I made her into a DCC RPG patron and handed out copies at Gary Con one year. I used her in a couple of DCC campaigns. But for this post all I'm concerned about is that she's fire. I love this drawing. I feel like I captured something special in a simple little pin-up sketch. In many ways I have moved on from doing pin-up art, largely because I feel like I milked it for what it was worth to me personally and also because of the complications involved in presenting sexualized imagery when you're trying to create RPG content that is ostensibly intended to be be played by whoever wants to play. I can't very well fill an RPG book with half-naked chainmail chicks and make the rules "inclusive" and call it a day. If all the females in a game book are drawn to be sexy and the text isn't written to play it up, then you've got a mismatch on your hands.

And you know me. I'm all for pin-up art. I love the stuff. But as I've said a million times, you gotta know your audience and you gotta own what you do. It still floors me that people can create comics or RPGs that are "about" broad-audience concepts and say they are for everyone, but the imagery involving women is straight out of a Luis Royo or Alphonso Azpiri book. Here's the thing. If you're going to have your book filled with titties then god damn well make a titties book. Don't be a mealy-mouthed milksop unwilling to own their own shit. Don't tell me it's a fantasy RPG that everyone is welcome to play, tell me it's a motherfuckin' titties and ass RPG that everyone is welcome to play. That much I can respect, at least. 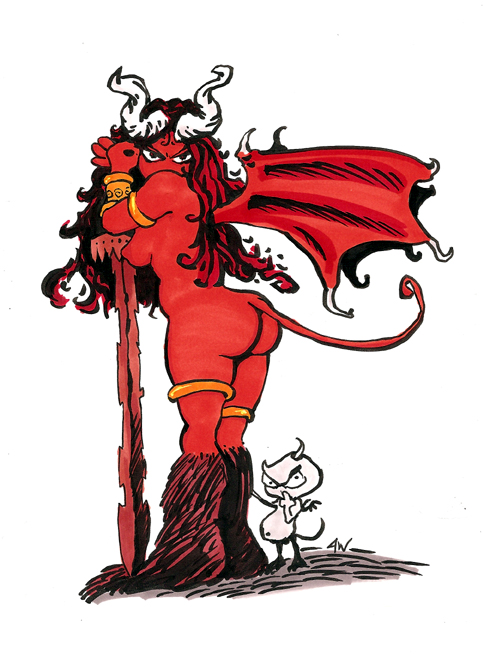