I have a lot of sketching lying around. Some I've shared long ago, others have never been shared. I thought it would be nice to present a series of some of them that are interesting for some reason or another.


This sketch of Amirlen is very old. Definitely 1990s, perhaps from around 1993. I was still in my infancy as an artist and trying my best to look like a proper Marvel Comics illustrator, trained in the schools of Kubert and Hogarth. But that was not meant for me. My fascinations lied with all things undergroundy, Heavy Metal, and weird.

Here's a sketch of Arzra during the time when they were high on my mind. At this point I was planning a comic series in which the lead character would just be naked and would shift between their male and female form randomly, sometimes from panel-to-panel.

And that's such a weird thing for me to realize because at that time I had absolutely zero idea about any sort of gender discussion that might be happening. This was the mid-2000s and I don't remember anyone talking about gender. My reason for making Arzra a gender-bending character was to express my deep concerns about personal freedom and my strong opposition to censorship and prudish minds. Basically I wanted a character that would make common Christians uncomfortable. Not to piss them off, not to insult them, but to just put this idea in their heads. Because the stories and the character were otherwise fairly standard. Arzra would tool around encountering monsters and crazy zealots and give them a dose of logic and a sword. While naked and gender-shifting.

But, as I said before, my heart wasn't into the idea enough to do the very hard work it would have taken to make it real.

Aside: There's no reason I couldn't dust this off and do a one-shot comic book tackling the character in one story or two. No reason at all. But the same could be said for Zarp, another of my 2000s characters who holds a dear place in my heart. 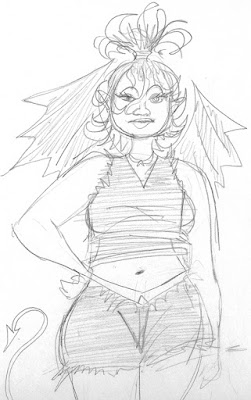 The name of this sketch is "demoness hick". I have no idea why I drew her other than I really like drawing cute demon chicks.