The DM's Notebook vs. The Campaign Bible

Over on this post, Froth sagely points us to this post by The Angry GM about a delicious little idea called the campaign bible. A campaign bible is just your GM notebook filled to whatever degree you deem necessary with your notes about the game you want to run or are running. You don't show it to anyone because it's yours and it's a mess. You don't write it for anyone to read. You don't write it for publication. It is a tool. It is called a bible because it's the repository of reference information necessary to make your campaign good.

Today I happened to pull the old TSR World Builder's Guidebook (Richard Baker, 1996) off the shelf. What a wonderful little saddle-stitched tome this is. Not only is it chock full of useful tables and ideas for creating a fantasy world, but it's got the best of the late-era TSR page design going on. The headers and callouts are color, the art is monochromatic, the tables have that nice gray bar thing going on. It's a solid book if you can score a copy. You can get the official PDF here.

As a sad side note, the artist who illustrated this book, Glen Michael Angus, died in 2007. He was born the same year as me and his work was very stunning. I'll post a few pieces from this book below. R.I.P. Glen Angus.

Anyway, I'm flipping through for ideas when I hit page 4 and Baker tells us that we should definitely keep a DM's notebook. This is a great example of the idea of the Campaign Bible expressed in an official AD&D product 24 years ago, which is pretty cool. I'm guessing there are other examples even older, perhaps in the pages of ye olde Dragon or perhaps White Dwarf, but I don't know as I'm not an expert on the matter. 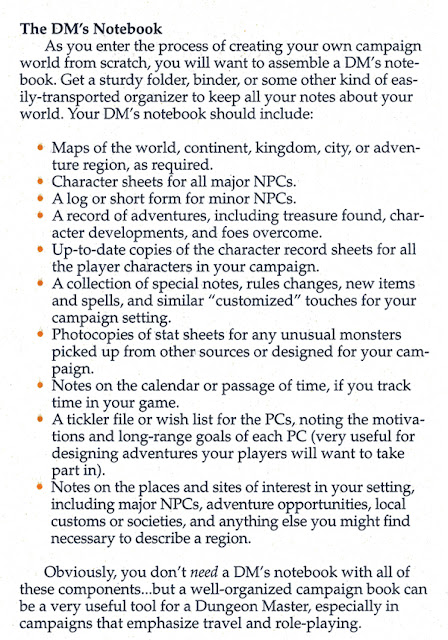 Baker's bullet list is pretty good. If you followed his advice to the letter, you'd at least be a well-prepared GM. I particularly liked his inclusion of a "tickler file" where you jot down the various goals, desires, and needs of your Players' PCs for use in adventure design, with the nod that Players might be more interested in adventures that ping their individual or group interests. Sage indeed.

So how does Baker's advice compare to The Angry GM? The Angry advice is more random, more angry, more visceral. And I really loved this bit right here because it's truth:

Creativity is what happens when random things bump into each other in your head and form some kind of connection.

Also, this hits home for me because I have always kept such fact sheets myself:

A fact sheet is a sheet of facts. Short, succinct lists of informational bits and bobs. Not prose. If you can’t master the vital skill of distilling things down to the important points and removing the excess crap, you can’t communicate effectively. Quit GMing.


The Angry GM gives you many more reasons to keep a bible while the Baker entry is short, sweet, and to the point about what you should include in it. I don't think these two things contradict as they are clearly talking about the same idea, just 20+ years separated in time and with wildly different formats. Both have one goal: to make you a better GM. Noble. 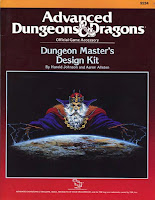 Here's an oldie: The Dungeon Master's Design Kit, for AD&D 1e. I never owned this. But it's got a lot of form sheets for the DM to use in creating NPCs, monsters, encounters, chases, and big ass finales. Sounds great. Given the nature of much of the official material of the time, I suspect it is dry and wordy and not very compelling. But I do see a fair number of random tables, so that's a plus. And who the fuck is going to fill out a whole one page form on a single chase scene before it happens? Talk about a bit of a railroad approach. I guess this was the era of Dragonlance.

As to my own version of the DM's notebook/campaign bible, it's not well organized at all. But I do have some habits I've been following for many years.

Prior to the internet, I always kept a literal file on each major project. Inside the file would be various sketches, maps, and notebook sheets scrawled with madness. Before that I would use spiral notebooks to draw and write everything in. And I was kinda obsessive about keeping things separated. I wanted a different notebook for each idea. Most of them were filled with blank pages buffered by 1-20 pages of actual notes.

Post-internet, I started keeping digital files exactly the same way: filled with sketches, art, reference pictures, and various word docs and spreadsheets (these are my fact sheets, per the paragraphs above). Today I tend to keep my docs and spreadsheets on Google Docs or in DropBox so I can get them at work. I always have a spreadsheet and I have even named them "bibles" in the past. They contain lists of names, places, and ideas for the thing, along with random tables.

None of this stuff gets shared. Not because that's a rule, but because why on earth would you share your own personal random scrawlings? The stuff you share is what comes out of those scrawlings. The adventures you run, the finished art, the finished books (if you're publishing). You don't share your bible stuff. It's fuckin' ugly.

One thing I would add to the notebook/bible concept is the swipe file, a term I swiped from the comics industry, who apparently swiped it from the advertising industry. Whatever the history, my use of the term is very simple. A swipe file is a file full of images and ideas that inspire you or have the potential to inspire you. I find this a highly valuable tool for creative work. I tend to keep multiple digital files full of stuff as well as private Pinterest boards and other such nonsense. When I'm feeling slow, I browse the files and see what gets drummed up in my brain. Never be a afraid to borrow and steal little nuggets from other creators because they damn sure did the same thing and anyone who tells you differently is a fuckin' liar. Nobody makes shit up whole cloth. Nobody.

When I Googled Glen Angus' art for this book I got nothing. Nada. Zilch. He did work on M:tG and other TSR books, and some of that comes up, but I wanted to showcase his work on The World Builder's Guidebook. So I scanned a little bit of it. Here are a few images from the book by the late Glen Michael Angus. 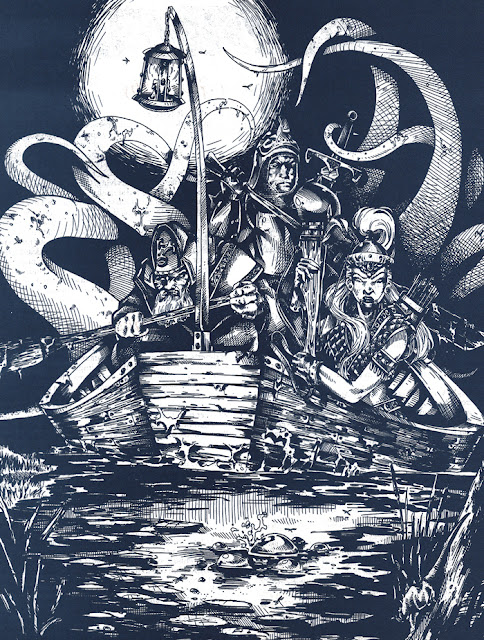 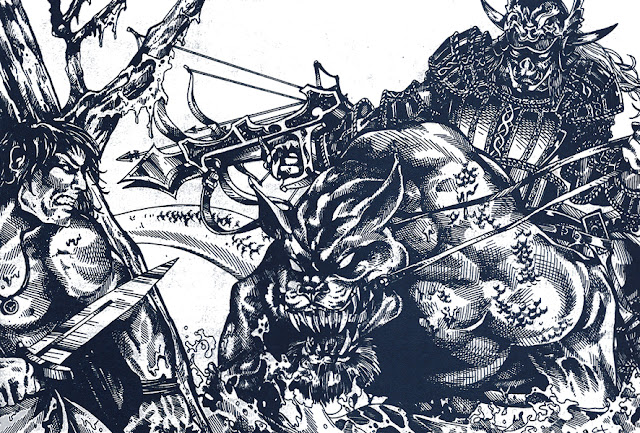