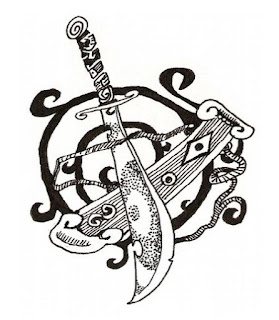 I haven't been drawing much lately. Part of the reason is just lack of time and inspiration. Another part is that I've completed all of my outstanding paying gigs (exception for one or two I need to do). Another reason is that I'm more in a noodling phase than a doodling phase. I'm thinkin'. It's scary.

Mostly I'm thinking about Dead Wizards. I can't predict what I'll actually do this year but I truly hope that this game will see publication in 2020. I've definitely never been closer to settling on the core mechanics, theme, and all that important jazz than I am right now. This game has been through many changes over the past couple of years and none of the iterations have felt as right as this one.

So one big open question about this project is the title. I've been using Dead Wizards as the working title for a few years. And while I like that name quite a bit, it's abbreviation is DW... same as Dungeon World. And like it or not that bugs the shit out of me. I know it's a minor thing, but it's enough to put me off.

So the title I'm leaning into right now is Sand in the Bone.

It's still evocative and kind of metal, even though this setting isn't "metal", per se. It's definitely sword and sorcery and Sand in the Bone has a gritty feel that I like. Plus it gets some of the setting's feel right in the name, sand being a central theme to the game.

I had set myself some hard rules about naming this game. I said absolutely zero of any of this:

Noun & Noun
Word of the Thing
Black anything