Back in the early 2000s I was doing more comics. I had this comic going for a few months (doing 1 page a week) that was about a gender-shifting catperson named Arzra (spelled backwards: Arzra). I really fell in love with this character. The whole gender-shifter concept, for me, was a direct inspiration from Tanith Lee's Death's Master. Lee's Flat Earth books are foundational to my inner fantasy worldview. I place them squarely in the sword-and-sorcery category alongside Robert E. Howard's Conan.

Anyway, Arzra was a gender-shifting catperson version of Conan. I wrote the character as a wanderer, getting into adventures, with a strong sense of savage honor. At this time in my life I was a pretty rabid individualist in my philosophy. I would have called myself "libertarian" at the time, though the term for me had a different meaning than what we think of today (I always picture cowboy hat-wearing rednecks with guns screaming about free speech today). For me, this was about opposing authoritarian moral police.

Arzra was meant to be a vehicle for me to tell exciting fantasy stories that could be sexy and philosophical at the same time. I have several scripts lying around and they generally involve the character wandering into a weird place and encountering a weird entity, usually with some kind of dialog exchanged that cuts to the bone of how I felt about religion and morality. Arzra wasn't inclined to take a knee before authority and he had no interest in being responsible for anyone other than himself. She was a barbarian, after all, albeit with a sharp mind. She could slice you open as easily with her words as with her sword.

The art to the left was part of the comic, which was done with brush markers, colored pencils, and Prismacolor markers on bristol. I believe the pages were something like 14x14 inches. It was a lot of fun to do, but the amount of labor that went into each page was a bit much for me to sustain over time. And these were totally rated R pages with lots of nudity, making it a bit awkward to share later on Facebook and the like. 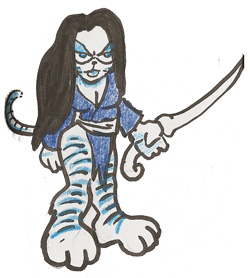 I did a bunch of drawings of this character for the period of a year or so and I really hoped I could turn it into a "regular" comic book series. Alas, doing anything "regular" just doesn't seem to be in my DNA. The only reason Black Pudding has persisted (yes I'm still working on #6!) is because it has very few constraints. I allow myself to wander and do whatever I like, within the domain of old school D&D style gaming. If I tried to make each issue themed or have an ongoing comic in it I'd probably flounder and sputter out. Much love to creators who can crank out issue after issue of comic book series over time. Salute!