Sometime in 1994 or 1995 I had stumbled upon Shadis Magazine and got a subscription immediately. This was about 5 years after I moved from my hometown and our original AD&D group disbanded forever. I had moved to GURPS, for a time, and was feeling rather isolated in my gaming needs. I was running random games here and there, maybe once or twice a year, and creating gaming junk on my own. Discovering Shadis was like realizing that yes indeed other people do this too!

From the pages of that magazine I must have found out about FUDGE, Steffan O'Sullivan's seminal "freeform universal do-it-yourself gaming experience". And I had to have it. So I sent off an order for a copy. As you can see, I got #94 in a 200 copy limited run, which I assume was the game's first printing/edition (?).

I was mind-melted by the cool-ass Lego-style building blocks that this game represented and I wanted to make something immediately. But I never did. I never even read the entire book. I think it was because I was just so isolated at the time. I didn't have any gamer friends and when I did get to run something or play something it was either AD&D or I used a loosey-goosey system I invented called the ROC RPG (Random Order Creations).

Years later it seems that FUDGE inspired and underpinned Fate. So I should be interested in and excited about maybe trying this game. Yet I'm not. In fact, when a 14-yo kid showed me his copy of Fate and wanted to talk about it I just didn't know what to say. I talked about having FUDGE back in the day and I had listened to a few podcasts about Fate so I knew a little about it. But I couldn't muster the desire to play it, even with this sparkly-eyed kid clearly wanting to play it. I can be a bit of a selfish guy and at that time I wanted to run Barrowmaze using B/X D&D.

Not sure what the point of this is other than to explore this weird memory. I'm always thinking about things I did in the past and why I did them. Or why I didn't. I wish I was more proactive and I wish I worked harder at things. I cringe when I think of all the years I didn't play many games or make much art or create things in general. Holy hell, am I getting old?

I hope that kid is running games now, Fate or otherwise. 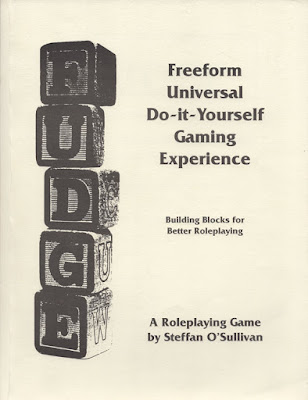