Yeah, yeah, yeah. It took going on the show to actually give the show a proper listen. I had listened to maybe 2-3 random episodes of the Frothcast before and enjoyed them but I hadn't dived in proper. And when I was on the show I hadn't listened to any of the Sunday Zine Club episodes. Shame on me. 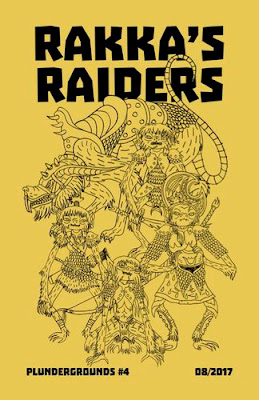 Ray Otus is on this episode. I discovered Ray's stuff by randomly finding his zine Plundergrounds. I thought it looked killer even though I didn't know anything about Dungeon World. I quickly signed up for his Patreon and I generally stalk him about the interwebs.

In the interview I found myself nodding in agreement over and over. Seems that Ray and I share a lot of philosophical ground when it comes to creativity. Specifically, he was talking about how monetization often ruins a creative space. And I agree. There's a beautiful energy in creative spaces that are fueled not by money, but by passion. When you create something in spite of not making money on it then you really love it.

It reminds me of my days in small press comics. We would make our comics, photocopy, fold, staple, and mail in trade to lots of other creators doing the same thing. We had co-ops and clubs and conventions. We had review zines and zine zines. It was awesome.

So I agree with Ray on this. But there is a big caveat.

For some people, their creative life is a dream of freedom. They are stuck in shitty jobs (or no jobs) and they have talent. They want (need) to be paid. I never hesitate to pay someone for their creative work, especially if I know that person isn't just doing it for fun. If they are trying to make a go of it as a living then I will support that effort, if the creations compel me.

I think Ray totally agrees that creators must be paid. His point wasn't that people should give away their work for free. His point was that if you're in a position to be able to give it away then that's a noble thing. I think.

When I published issue #1 of Black Pudding I remember having an internal debate about whether or not I should make it Pay-What-You-Want. I considered setting a price. I didn't want to charge too much so that no one bought it. And I didn't want to make it free so that I couldn't earn any money from it at all. This was my creative labor, I wanted to have the option of being paid. So PWYW was, for me, a perfect solution. If you can pay me something, and you want to, then I'm happy to accept. If you can't or don't want to, then enjoy the work for free with my compliments.

As an aside, this reminds me of old debates back in the oughts among webcomics creators regarding charging for your stuff. A lot of comics back then were experimenting with paywalls. As far as I remember, those experiments didn't work out. A more reasonable model, and probably more enduring, was to publish your comics for free online and sell peripheral merchandise such as print collections, tee shirts, and mugs. Very early on in my online life, I adopted this philosophy. My preferred model is to offer my primary work for free (digitally), then sell related items. DriveThruRPG makes that super easy. But I'm too damned lazy to really capitalize on actually selling merch. There's a tee shirt link on my blog that I doubt anybody ever clicks. There's no Black Pudding shirts up there! I need to fix that.