That RPG Folder You Unearthed on an Alien Planet

More continuationationisms on this topic. 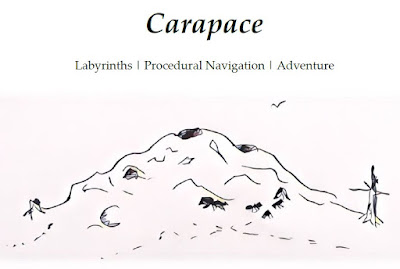 Goblin's Henchman oozed this brainism onto the world like a delicious hobgoblin booger. And it's tasty. Carapace is basically a procedural (as on the cover) adventure wherein you make a giant scary ant colony then send your characters in to die. But it's cooler than that. Check it out. It's pay what you want.

This is a weird 15 page game about waging war on librarians. Well, Librarians of Doom, of course. Not just regular ones. You play the role of a regular citizen or a member of an ancient order at war with the LoD. It's a roll-under-stat, d4 based game. Looks extremely simple and light. I figure the inspiration was probably hanging out in libraries and wondering what it would be like to slay the librarians... hmmm. There's also a Black Hack Edition.