A continuation of this series wherein I examine the contents of my RPG folders and sort that shit out.

Dungeon Gits is a "very small" RPG by Scott Malthouse. You get what's on the tin with this one. It's very very small. I read the rules today for the first time (that I remember) in like less than 1 turn*. And it's great! It's a simple 2d6 + mods vs. target system with an open ended class and knack setup. You can whip up a character in... (pauses to go whip up a character, start to finish, setting timer...)

*If you don't know how long a turn is you need to turn in your old school license to drive**.

**I kid. No such gatekeeping shall be rendered here.

Yep, it took me 3 minutes and 15 seconds to create Dilhawl the Fisher Fish. Well over half of that time was spent buying gear.

One question I had was about a rule on page 4 that says "you can only use weapons or armour with a bonus equal to your Bashing attribute". In my mind that should be "equal to or less than". Otherwise my dear Dilhawl can't use a dagger... one of the only weapons he could afford to buy. Am I mis-reading that?

I could dice with this game. And it's creative commons, so you can take this little bad boy and reskin, remix, hack, supplement, and tear it up all day long. Just give Scott credit. Here's a review of the game, which is probably longer than the game itself.

Cool art, maybe public domain? There's no attribution. At first I though this one was Erol friggin' Otus. 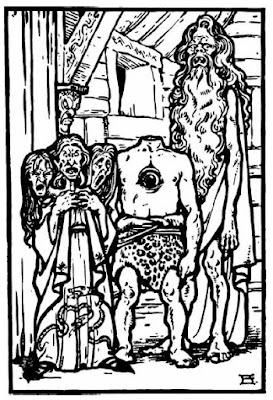 O Povo do Buraco #1 is a Brazilian zine written for Lamentations of the Flame Princess. Carlos Silva and Tertoleone give us words while Diego Santos gives us pictures. The pictures are really cool, very comic book in style. The writing seems fine but the English is a little uneven. Not a big deal, as long as you know up front that this was probably originally Portuguese and has been translated.

This bit is on page one, wherein the author describes The Hole, a wretched place of vile cultish activity:

Which is kind of a weird thing to write in an RPG book unless you actually want to alienate the youngest portion of your potential audience. But hey, LotFP is a game-ethos that attracts shock-value creators. I mean, if  you're into both fantasy and something like grindhouse or slasher flicks or the like then this is probably a good fit.

Anyway, the zine seems to be describing a village that has become the hub for a drug ring. The drug is in the Vatapá, which is a kind of shrimp-bread-peanut mush. Very interesting. If I was gonna run or play this I'd want someone to make that dish and bring it to the table in exchange for like 6 re-rolls or something. Neat.
Posted by James V. West at 10:26 AM