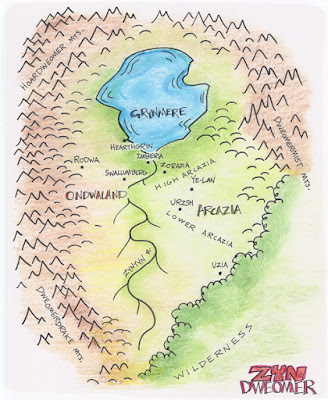 In this post I had some images for the races of my setting, Land of Hof, which I was calling Zyn Dweomer for a time. Here's a map I drew for the setting when it was Zyn Dweomer.

The idea at the time was to have three kingdoms.

Arcazia was the land of the elves, who were masters of spacial magic. In theory their domain was limitless because of the way they used their magic to warp space and time, bending it in ways that defy logic. The elves here were also darkly humorous and weird. Their customs were abominations to the puritanical humans.

Grynmere was a vast lake or inland sea surrounded by picturesque hills and fields. This was the land of the grimmers, a sort of mix between goblin and dwarf and gnome. Their deal was hospitality. You go to Grynmere if you want good food and relaxation. But don't start any shit because you'll be at the bottom of the lake wearing iron boots.

Ondwaland was the human lands. Humans in this version of my setting were just the most regressive dickheads imaginable. Loosely inspired by Rome and the Catholics and imperialism in general, they had this oppressive monotheistic religion and a mandate from god to dominate the world.

So the idea was to have this constant tension between these three peoples. There would be an uneasy treaty at any given time, with the humans trying to find ways to expand, the elves fucking with the humans, and the grimms trying to remain neutral and make mad cash off the stressed out humans coming to their lands for respite.

One of the ideas lounging around in my folders and my head that will probably never see the light of day (in this form anyway).
Posted by James V. West at 11:05 AM