Tables are part of RPG DNA. There were tables in Dungeons & Dragons and there are tables in nearly every RPG since. Nearly, not all.

This is because tables are the way we have decided to present data that changes per given criteria. So if you tell me that a warrior hits on a 7 or better I don't really need a table for that. But if the warrior's to-hit of 7 becomes 6, 5, 4, etc., depending on their level of expertise... now I might benefit from table.

Some games' core mechanics are table-based. Certainly D&D's mechanics employed several tables such as the classic to-hit vs. AC, or the cleric's turning table, or the saving throw matrices ("matrix" is another word for table, albeit with a wider range of application which we do not give a shit about here).

Here's a screenshot of attack tables from the game Furry Pirates, which I own for some reason. 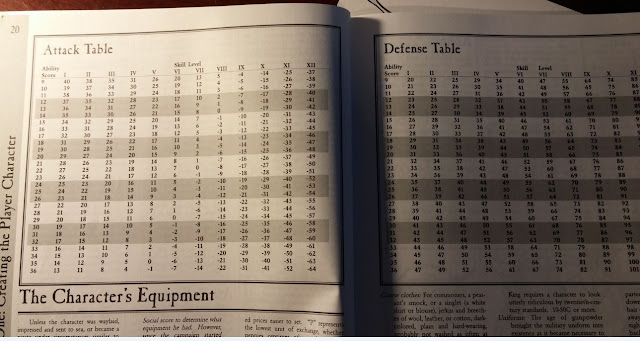 You see how that one works? Simply ascertain your ability in attacking, cross reference it against your target's skill level in defending, and you'll find your base chance of hitting. Then I guess you make your roll. If you happen to be defending, you'll need to do that same kind of exercise but on a different table. Easy-peasy. This method probably flows like warm butter over a hot skillet during play. Right?

My interactions with players at public games leads me to suspect that this would not go over very well with modern groups. To be fair, it probably didn't go over well when it came out. How many people out there have played this game ever? More than once?

I don't want to trash Furry Pirates, here. It is certainly not the only game to have a lot of tables*. Tables can be great and are part of RPGs forever. But table mechanics tend to be more bothersome. People love to roll on a table for a special event, such as a critical strike or "you found something cool". But to have to constantly reference large, complex tables for repetitive actions? No way. I doubt anybody enjoys that.

And I know that I often bitch about people who seem to be incapable of even engaging with any game's mechanics. "I just want to tell my stories, not read rules." (Then try not playing games!) But there is a point at which the game system is asking a bit too much. And to be completely fair I have never played this game nor do I know all its rules. So I could be wrong about it. But my gut tells me that attack matrix is clunky as fuck at the gaming table.

*I own a couple of the Rolemaster books and last time I flipped through one I was greatly impressed by how all of it was tables. All of it.

So now that I've trashed Furry Pirates for having a very ridiculous combat mechanic, let me do it a solid and sing some praises. This game has a lot of cool pirate shit in it. It's explicitly set in the real world (The New World, c. 1700) and is loaded with stuff about ships, sailing, piracy, voodoo and magic, actual historical figures like William Teach (Blackbeard) and Captain Kidd, and a load of awesome resources you can use for this and really any pirate game. It's like the author was fascinated by the subject and crammed all their knowledge and ideas about it into a game with talking animals as characters. Which, honestly, sounds like a lot of fucking fun to me.