C. September 1984. A young me, approximately 14 years old, depending on exactly what day of the month it is*, picks up Savage Sword of Conan #104. I'm all-in on the Joe Jusko cover. There's ice and snow, muscles, a ninja**, and a redhead with underboob. What's not to love?

I remember that day. I picked up the issue at a local convenience store and it was the second or third time I did it. I am pretty sure the first SSOC I bought off the shelf was #103, which remains to this day one of my favorite single comic book issues of all time. That issue is what made me fall in love with Conan the barbarian. Well, y'know, after the movie anyway. I would be a religious consumer of SSOC for at least the next 2 years. The names Ernie Chan, Joe Jusko, Gary Kwapisz, and Tony Salmons would be etched into my developing brain, ensuring my lifelong love of sword and sorcery and muscled barbarian fantasy.


That's right. I said it. I might be a woke lefty with no tolerance for right wing fascist pricks, but I like a good exploitative pin-up barbarian chainmail chick now and then. And go fuck yourself if you find that troubling***. Wokescold somebody else.

I've been thinking about chainmail chicks lately. Check out Black Pudding for my take on an old school character class emulating what I love about this motif.

So what makes this motif compelling? Some elements are just god damned obvious, base, and probably rooted in my I-Am-A-Man existence. They're sexy as hell. They're tough, bombastic, and bodacious. I want to be a chainmail chick, motherfuckers. You heard me right. I don't want to nail one, I want to become one.

To be tough a nails, able to gut a man in a single blow, and still look damn fine? Hells yeah. The problem is there isn't enough variety on the meme. We need more fat chainmail chicks, black chicks, buck-tooth chicks, bald chicks, etc. Because fuck your beauty standards, you reactionary prick****.

So in Black Pudding #1 I had the Chianmail Chick character class for B/X style OSR gaming. I remember creating that class and thinking "I really need a male matching mate". So I also created the Sinewy Barbarian. Those two classes were my approximations of Conan and Red Sonja, from the comics, in RPG format.

It's kind of a crass move to counter a busty character class with a beefcake. I know that. I'm not arguing that I did things correctly. I never claimed to be correct about these things, just honest. I wanted to present something I loved. And I didn't just include the Sinewy Barbarian because #equality. I did it because I have a tremendous love for the archetype that Conan represents. I am an a man, after all, and the idea of a strong man facing a hideous and dangerous world appeals to the reptilian part of my brain in a big way. It's why I watched Conan the Barbarian, Beastmaster, and The Road Warrior every chance I could when I was a teen. It's the same reason Big Trouble in Little China remains in my top 5 favorite movies of all time. Again, I might be a woke SJW, but I'm also a pulp-inspired aficionado of all things pin-up and two-fisted action. It's in my blood.

Ok... so considering the dynamics at the gaming table, how feasible is it to have chainmail chicks? Well... it kinda depends. I can see a shitty situation where a reactionary prick includes them at his table and amps up the misogyny. This is not good. It's uncomfortable and harmful. But I ran several games in which people were playing Chainmail Chicks from Black Pudding and having a great time of it. There was no sexism or misogyny. We were having a grand old time.

I guess this is one of those things. Like... if you're putting something out there that pricks might use in a negative way, then what is your responsibility to help keep that from happening? I am not sure. I feel like the intent of the work is inherent in the presentation. If I'm a prick for creating the Chainmail Chick then the work itself will reflect as much. But if I'm not being a prick then the Chainmail Chick, particularly when considered alongside the other content of Black Pudding, should not feel misogynistic.

I feel like it's all OK. And many women have told me me how much they love my representation of women in my art, even when I'm doing the sexy pin-up thing. I fully understand how dangerous that is... that not every woman is going to react the same way. I get that. But I can't tailor my art to suit all the outliers and all the feels. I just do what I do and I try to do it responsibly. I really really try.

Holy shit this post is going long and I've had more than a few glasses of sangria. Enuff is enuff.

*My birthday is at the end of Sept.

**I don't care if that guy is supposed to be a ninja or not. Is it supposed to be a Black Dragon, such as those seen in King Conan comics? I don't know. Looks like a fantasy ninja to me and my 14-yo brain read it that way.

***I'm not sure how to elaborate on this. I recognize and accept that misogyny is a huge fucking problem but I do not accept that sexy images of women is the root of that problem. Or even a significant element of it. Now, I do believe that exclusionary sexy images are a problem. For example, if all the pin-up women are skinny bitches that's not fucking cool at all. People come in all types, so let's not be dicks about it. 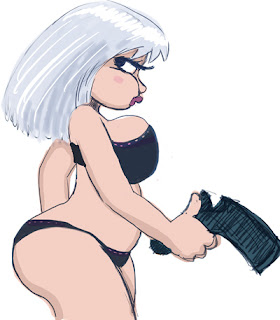 ****Oh, hey, let me clarify something. Everyone who has followed my creative journey for any significant time (may the gods bless you) knows that I like to draw fat girls. But I am not a discriminatory connoisseur of the pin-up. I like all shapes and sizes. I can be just as enamored of a skinny waif as a fat broad (holy shit I don't mean that in a negative way... "broad" is such a fucking nasty term, isn't it?). What I mean to say is that beauty is not defined by size or shape. Beauty is largely subjective and a person's beauty in the eyes of a beholder is a package deal. Or something. I'm a dude here. I'm trying real hard to express a positive message and I'm probably not cut out to do it. Please move along, nothing to see here.

This has been a drunk post. You are welcome.