The Wonderful & Terrible Things That Effervesced in the OSR Scene, Part 5

Time to stick a fokkin' fork in this fokker. It's been a rambling mess, hasn't it? 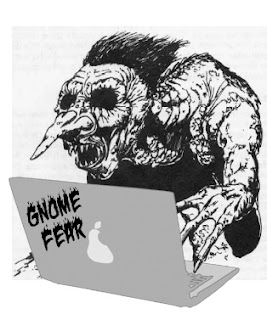 Truth is I wrote like thousands of words about this and deleted them all. Nobody wants to read about the various OSR controversies from the past few years. It's old news, right? We know the birds who are bad seeds, generally, and I think many of us just kind of avoid/ignore them. Some people would see that as a failing... we should be kicking the bad seeds' asses. But I'm not a militant sort of guy and I don't own the hobby nor do I own OSR.

There will be bad seeds. We can ignore, avoid, and/or criticize them. We cannot kill a motherfucker, you know? Nor should we want to. Fuck that noise. You can take your violent ideations and shove them up your ass. I came here to make art, games, and to play. I don't tolerate assholery very well, so don't be an asshole. 'K?

An example of assholery in game design, just to be motherfuckin' clear:

Making it a point to state that your game is explicitly not PC. You might think that reads as "my game is not bullshit" but what it truly says is "hey, I'm a giant dickhead who is so threatened by socially-conscious young people I have to lash out at them impotently from the pages of my nerd book." It's a really nasty look and you should avoid it at all costs.

And that kinda wraps this up. To quote Gump, I have completed my statements on the matter.

EDIT: Also, here's what I was thinking about the OSR about a year ago. I still feel this way, though, as I've said, I don't feel any necessity to use the term all the time. I use it when I'm making or thinking about stuff under that umbrella, but at other times it just doesn't come up. Peace.
Posted by James V. West at 1:47 AM