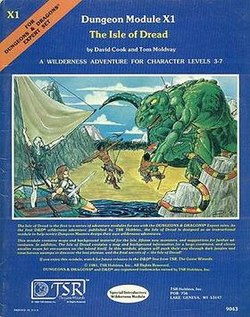 One more DCC post. Short and sweet to finish this bastard up because I feel like I'm in the "long winded description of your game" territory. And nobody wants that.

The PCs had to deal with The Blue Queen. They found themselves back in their native village, 150 years later. And it was a winter hellscape. They fought some wicked ice witches, contended with a foul witch who gave them some guidance, and somehow ended up on X1: The Isle of Dread... but the island was caught in a time storm and all the dinosaurs were undead. The pirates they encountered (there were pirates) were the ones described in the DCC RPG rulebook... on flying boats. And of course they captured a flying boat and kept it for the next 2 or 3 game sessions.

After escaping the Isle of Dread, they finally confronted The Blue Queen and her 50' ape protector. The wheel of fortune from Hole in the Sky was back, which resulted in one PC becoming a cyborg and another PC becoming a monkey. Which he liked very much.

They killed The Blue Queen. They were now level 4 PCs. I then ran the DCC RPG adventure The Making of the Ghost Ring and we left the campaign as the PCs attained level 5. We have not revisited in over 2 years. Maybe we never will. I don't know. But the entire campaign left me with lots of great RP memories and some new friends. How can you go wrong when your campaign involves space-faring Viking ships, ninja monkeys, cyborgs with chainsaw-action battle axes, and undead T-Rex?

DCC RPG is fucking awesome. It was awesome for me particularly because it did exactly the thing Goodman advertised on the tin... it brought me back to a time when gaming was fun and imagination was king. I was ripe for it too. Like so many other people my age who played RPGs when we were young, this was a thing we badly wanted, and badly needed. It was a net good. DCC RPG told me it was OK to be wildly creative, mixing genres like peanut butter and chocolate, killing characters like a madman, and getting people excited at the table again. And like it or not, sometimes you really gotta be told that shit. It's not always enough to be neutral in game design. Say what you mean, mean what you say.

Of course DCC isn't all good for me. I could nitpick and quibble about the system. While I love the many funky dice I also fucking hate them. I still can't quickly grab a d24 or d16 without carefully examining them. And one of the main reasons I never really got into designing stuff for DCC is because the god damn spell descriptions alone are a huge endeavor. Whereas I could write a B/X style spell in two sentences, you need a solid page or two to write a good DCC spell. And don't even think about patrons. I wrote one patron, which I handed out at Gary Con in the form of a little zine. Hella Nor was her name and I used her in my other DCC RPG campaign which I ran online in my Monday night sessions. It was a bit of a chore. I don't particularly enjoy that side of DCC and perhaps that is one reason the published materials are so popular? Someone else did the labor? I'm not sure.