The Wonderful & Terrible Things That Effervesced in the OSR Scene, Part 2

Where was I? Oh right. I was supposed to be talking about the OSR scene. More-or-less. Sorry about the lengthy DCC RPG campaign posts. I gotta do it though. 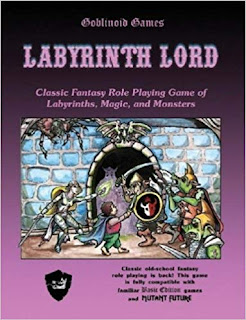 This group consists of one of my oldest and dearest friends named Jayne as well as four others that I have only met/known through the Monday game and/or other RPG scenes: Andy, Bill, Dyson, and Matt. These I now also call great friends.

Sometimes I call this group the Doomslakers, whether they like it or not.

The whole thing started because god damn it to fucking shit I wanted to run some old school D&D. I was running DCC RPG in my face-to-face games but I had this burning itch to run D&D. I got the group together to play Labyrinth Lord, which had quickly become my absolute darling by 2014. Here was a game that was basically exactly the D&D rules I used to play when I was young. It was a mix of basic and advanced... the same shit I always did! Someone had put it in a book, slapped the best name on it since D&D, and gave an open license to let me make shit up and publish it. I was in.

To start out, I ran a Labyrinth Lord campaign for the group and it lasted somewhere around 50 sessions. I kept copious notes. I tracked XP. The entire campaign was original and I eventually published one module born from it: Winds of the Ice Forest, which got a very nice review on my favorite podcast Save or Die. It was a wonderful little moment in time in this tiny niche hobby.

The campaign was tons of fun for me. At the time, the players were Andy, Jayne, Bill and Matt with an occasional fifth player (I think we had 2 or 3 who popped in and out). It was a strongly northern-themed game with lots of snow and ice and it culminated in the party battling a tremendous purple worm monster that killed one of the PCs in an epic moment. The materials I created for the campaign are still in my folders waiting for me to write the god damned follow-up modules Ur-Kak the Swine and Shrine of Worms. (I will write them, I tell you!)

After the Labyrinth Lord campaign we played DCC RPG, Star Frontiers, Bean!, The Black Hack, and others I cannot remember. The group plays on to this day, thankfully.

Labyrinth Lord is crack cocaine for someone like me who just really really wanted to write D&D stuff. Leading up to the time when I discovered the OSR scene, I was creating RPG materials in a vacuum and they were largely meant to satisfy my desire to make D&D stuff. In fact, in the year prior to 2012 (see here) I was writing a funny animals RPG that was explicitly riffing on the D&D tropes that we all know and love. Zyn Dweomer, which was a webcomic I was doing at the time, was the precursor to Rabbits & Rangers. It was talking D&D animals.


Anyway, I wrote my first OSR module, Howler, as an OSRIC adventure first then converted it to Labyrinth Lord once I realized the truth. I was blown away by the amount of material that had already been created specifically for Labyrinth Lord. Some of it was brilliant, such as Barrowmaze (I'll get around to that soon). Some of it was just kinda OK. I won't call out specific books that were just OK (or worse), but they do exist. It's damn easy and fast to crank out a Labyrinth Lord adventure that has no sizzle. Just a few rooms on a crude map, some orc stat blocks, a treasure horde, give it a bit of Microsoft Word layout and call it done.

And yeah sure that's really all you need in order to run a fun little dungeon crawl. I totally get that. Hell you don't even need that. You can crank that shit out in a few minutes. But it is nice when someone else does the work. And let's face it... that's the nature of DIY publishing. Very little gatekeeping means you get the good and the bad...
Posted by James V. West at 10:24 AM