EDIT: Changed the name of this DCC RPG sub-thread.

These posts are going to be all over the fucking place, so pardon me ahead of time. This is an act of stream-of-consciousness commentary to summarize/explore my experiences in the gaming community since 2012 (and maybe before). This time it seems that I'm writing mostly about DCC RPG, my entry point to the old school scene. This post has little or no juicy "terrible things about the OSR" bits. If you're here for the controversies all you'll find is my gushing on and on about my first DCC RPG campaign. Maybe next time I'll bitch. 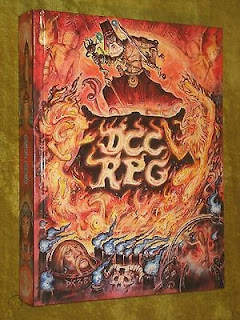 In 2012 I distinctly remember being super-duper inspired to get a local gaming group together and play some DCC RPG. I didn't buy the book until I listened to a couple of episodes of Spellburn, then I pulled that trigger pretty fast. I got the wizard cover because it's the most badass.

It was totally the enthusiasm of Judges Jen, Jeffrey, Jim, and Jobe that got me to buy that book. It was a $50 investment, after all. And I had never held it in my hands. But their description of the rules compelled me. I was all in.

As soon as the book arrived I started pouring over it and I got a group together to play. The first game I ran was with 3 players at my house and the very first die roll of the night killed a zero level character. I think everyone at the table fell in love immediately. It was Portal Under the Stars, the zero level adventure that was in the original printings of the book. It's a solid adventure that you can run in a few hours so I highly recommend it as a starter. 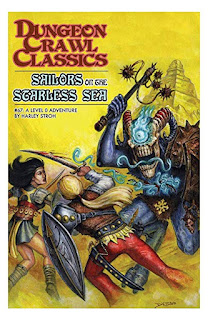 After that we got together relatively regularly with 4-7 players each night. I ran a campaign that got it's start initially with Portal, then with Sailors on the Starless Sea when others joined in. Of course that adventure was memorable and one of my players still to this day mentions his poor little female halfling who was yanked off the ship into the deep where the leviathan waited. He had high hopes for her.

We went from Sailors to Hole in the Sky... this was shortly after I got back from my trip to Gary Con (was it V? I can't remember!). Hole in the Sky had just been published and I snagged it at the con. It was a huge hit with the group and a huge blast to run. By this time our core group was fairly well established and we had a nice party of level 1 PCs.

From that point I started mixing it up with old TSR modules as well as Goodman Games adventures and some homebrewed ones as well. During this time I was creating and publishing materials for Labyrinth Lord more than anything, and playing that game online. But locally, face-to-face, it was mostly DCC RPG. I allowed 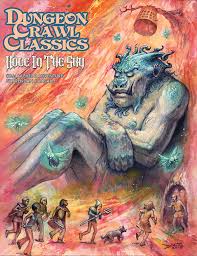 myself to just play and have fun with DCC rather than worrying about creating publishable materials.

I used certain items and ideas from those funnel adventures to form the basis for the entire campaign. The key NPC from Hole in the Sky became The Blue Queen, the chief villain of the game. The PCs "worked" for her several times (whose gonna say no?) and eventually became her mortal enemies. I went from Hole in the Sky to the classic D&D module B4: The Lost City... which I mashed up with DCC's Peril on the Purple Planet box set. I had snagged that lovely treasure via the Kickstarter and was eager to give it a spin.

I mean come on. Have you seen Peril on the Purple Planet? It's lovely. So much gamable stuff in that box, so I gamed some of it. Not all of it, not by a stretch. But enough.

I know you're going to ask me, so here is how I mashed it up. If you weren't going to ask and don't care, just fuck right off for a minute while I spew my fanboyish gamer squelchies.

The PCs got the boat from Sailors but didn't get to keep it for some reason. I cannot remember why. Anyway, after Hole they found the boat again or another boat. Again, I'm old and I take shitty notes. The point is they found a Viking style ship. There were some undead monsters too. They had been set on a task by The Blue Queen to find one of her warlords, a demon who had been locked up someplace far away. They had a clue about the location of the ship, which would help them find him.

So they find the ship and it's got this funky crystal-based control panel at the helm instead of a wheel. One of the part members, perhaps Nando the Thief, was able to ascertain its usage. There was a helmet he put on and was shown a vast panoramic view of the cosmos. He made some nice saves and was not driven insane and was in fact able to activate the ship which proceeded to propel them through space at warp speed. It was an epic little session and I remember being quite proud of how I described this event and the players seemed to be hugely into it.

Nando wasn't a good pilot and didn't land very smoothly. The party crash landed on a purple world near a large purple ziggurat. This was, in fact, the pyramid from B4.

Here's Part 1 of this meandering series if you're a completist.
Posted by James V. West at 9:35 PM