EDIT: Changed the title of this because it's kind of its own thing. I also know how to use "its" and "it's" correctly so blow me.

Continuing what I was saying earlier about my first DCC RPG campaign... no juicy bits here. Apparently I really really want to talk about my DCC game for a minute.

Peril on the Lost City! 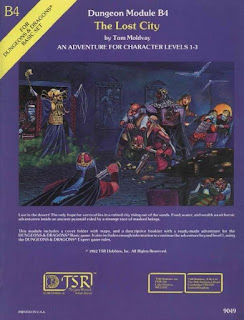 The PCs had crashed their cool new Viking ship on a purple planet next to a big pyramid thing. I was only loosely using the content from Peril on the Purple Planet so I made the atmosphere outside absolutely toxic. They got out and realized very quickly that as the weirding sun faded, the air became less breathable. There was a realization that if they didn't find shelter soon they'd die. So they immediately made for the pyramid.

They ascended to the summit looking for a way in and found it. A trap door. They entered the pyramid and I used the map from B4: The Lost City for the remainder of the adventure. I only vaguely used the contents of B4, allowing the room contents to guide me in certain directions. They were searching for one of the Blue Queen's generals, a demon whose name I cannot remember. They found him locked in a bird cage in the pyramid. Between fighting some kith and dealing with the machinations of the demon in the cage, they eventually set the thing free (something they also did in Hole in the Sky). It didn't help matters.

I don't recall all the events but the culmination of the adventure had them facing a cult of sorcerers devoted to the green stones and the death orms. The green stones, it turns out, were the crystals used to power the Viking ship. But more importantly, the great death orm mother was being summoned in a ritual and, with some clever use of green stones, the PCs were able to sort of take control of the orm (after slaying the entire cult) and took it on a magic carpet ride across the cosmos back to their own home world.

Naturally they crash landed the great, dying death orm in a fury of exploding bits. Plot twist: Their long distance adventure resulted in a huge time lensing effect. They arrived back home after merely 3 days as they experienced it but some 150 years per home time. The Blue Queen had taken over the entire world and was turning it into an ice planet. It was the PCs' actions that allowed her to do this.

Of course they vowed to depose her and stop the madness. 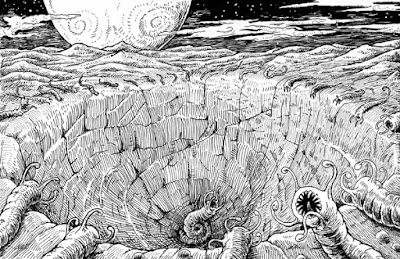