The fuckin' OSR. Who would have thought a movement about making and playing old style elf games could generate controversy?

For my part, the OSR is a creative movement and I love it very much. I fully realize there are problems within the various OSR communities and people who want to completely avoid them have every right to do so. I personally don't think of the OSR as a community. It's more like ten different communities with varying degrees of overlap.

No. Much more than a community, it is an artistic, creative movement. It's a way of making and playing games. It's a way of taking an old thing you love and making art with it. For me, that is. That's why I choose to play in this sandbox. Black Pudding is all about playing in that sandbox.

And the truth is that "OSR" is just a handy label. It's short, has a meaning I can get behind, and is recognizable. It's fully interchangeable with other terms like "DIY D&D" or just "old school gaming". And when you drill deep down into it, this isn't even simply about D&D. It largely is, I would argue, just by looking at the actual content being produced. But no, it's more than just that. Whether you're into Fighting Fantasy or Call of Cthulhu it's got a common core.

I was the kid who wanted to buy paper and pencils, not toys. I wanted the rub off decals and markers. Remember those 99 cent rub off things? I can't remember what they were called. You got a little plastic sleeve in which you found a folded up background image, such as Batman's cave or Road Runner roads. And there was a sheet of images of Batman, Robin, Coyote, Penguin, etc., and you would put the image where you wanted it on the background and then rub it off with a pencil or something. And BAM! you created your own image, story, scene...

OSR, RPG, gaming, D&D... it's all about games of WHAT THE FUCK IF. And I love playing what the fuck if better than anything. I guess that's all I have to say about that. 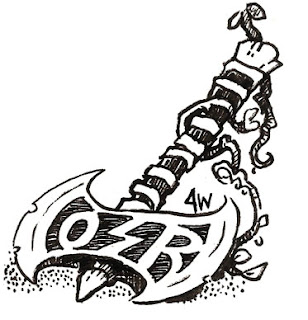