I've got a ton of old small press comics and zines in storage. Haven't looked at them in YEARS. I must have snapped some pics of a few of them a while back and forgot.

This one is Tony Brandl's Phaser-Face and the Infernal Equinox. This was a little series that was full of charm and wonderful cartooning. I was in the United Fanzine Organization with Tony and I had the pleasure of sitting next to him at a S.P.A.C.E.* event around 2002 or 2003. He was a fun guy. At one point he stood on his table and loudly YAWPED. I'm not sure why but it caused more people to visit us. This particular year was not long after 9/11 and Dave Sim was a special guest (he was always a special guest come to think of it... this was probably around the time or before the time he was sort of shown to be a... nutter?).

Sim stood up and made some comment about terrorism, freedom, or something. There was some dude in the room who shouted over him with a counterpoint. It was this weird moment where I got the impression that a real and important political issue was being discussed and I was totally oblivious to it. I was vaguely aware that there were two broad strokes arguments and I didn't understand either of them. I was fairly clueless... I was there for comics, dammit!

Anyhoo... Phaser-Face was great. If I'm not mistaken, Tony left the small press comics scene a year or two later to go to university and became involved in acting. I have no idea where he's at today. First hit I get on Google is his old website, which appears to be fairly empty. 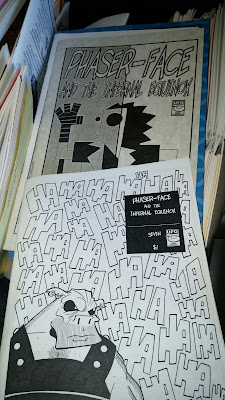