I just noticed that I have 12 drafts in my Blogger sidebar. What could they be??

Here's the first one. I wrote this back in June, I think. Can't figure out why I didn't post it.

I gotta find this game. I got it for Xmas one year when I was a kid and I think it may have had a bigger impact on my wee brain than I give it credit for. When I try to think about the stuff I like, such as D&D and comics, this game always comes up in my memories.

This would have been the early 80s. I would have been about 11 or so. This was a few years before I discovered D&D. When I encountered D&D the first time it inspired me so much I HAD TO make my own RPG. So before ever holding a single RPG book in my hands I made my own RPG. What did it look like? Fantasy fucking Forest.

I drew a map with a path. I drew monsters on the path, treasure, a castle, etc. At each "encounter", I wrote down two numbers. One was for attack and one was for defense. I then wrote numbers on little pieces of paper and put them into a bowl. I had no dice.

So I ran this game for a couple of cousins who were probably 9-10 years old. It was probably a total clusterfuck but it was my first GMing experience!

I remember making 3 map games in total, using colored pencils and maybe a ball point pen. Unfortunately those items are long, long lost. I would LOVE to find them again. But I don't think they exist anymore. 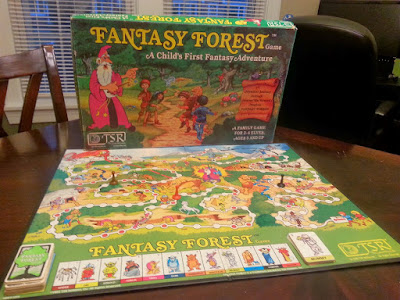