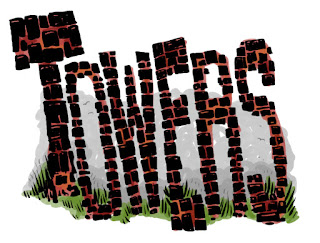 It's been about 1 year since I started working on this project. In that time I have put a lot of hours into it, off and on. I put it down for a month or two, then I pick it up and work on it relentlessly for a few weeks, then I put it down again. Such is the way until I reach the point of no return.

Current page on the drawing board is about towers.

The land of GOZR is a far-future sci-fantasy wasteland in which the Pretty People angered the Sun and were wiped out for their affronts. Now only the lowly gooz remain... the ugly ones who served the Pretties so long ago. The ruined world is full of ruins. Gooz, poking their heads out after all these years, are bold enough to explore them.

The ruins include a lot of towers. Any party of PCs wandering the wilds has a 2 in 6 chance of spotting a tower on any given day. Of course the GM is free to pre-populate the setting with towers as they wish. This game is not proscriptive about how you play, it isn't terribly procedural, though it does include lots of procedures for generating randomness. It's a god damn romp, after all, not VCR instructions.

So right now the towers page is just a few random tables to determine height, thickness, and general traits. I might include an example tower too. We'll see. 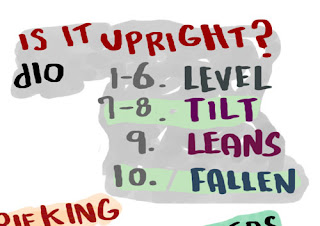 One of the things that sparked my imagination while doing this page was a little table I included about the tower's vertical situation. One possible result is that it is already fallen over, so you could have a little tower crawl through a fallen tower where all the inner space is agog.

I could cap this at one page, and probably will, at least for now. Just a simple page of random tables for tower generation. I went a bit over the top on magic (10 pages) so I'm already swollen bigger than my intended 28 pages (I'm at 33 and not finished yet).

Far too soon to say, but my hope is to publish this as a "issue one" and then get into a second floppy that has more options. Like... you can just use the first floppy and be fine but if you want more fun shit you get the subsequent issues. We'll see how it pans out.