What Am I Doing??

We are in a global pandemic, it is entirely possible we Americans will re-elect a psycho reality show clown as President, and I turn 50 this year (if I live long enough). Yes, it's mass fucking chaos everywhere. Not cool, universe. Fuck off.

So in the midst of all this mess what exactly have I been doing? In terms of creativity, of course. Nobody wants to know what I'm eating for breakfast or what I do at my day job.

I've been keeping busy. I recently did a character sheet for The Other Side Publishing, I did a special Virtual Gary Con shirt design, I'm working on a GM-screen thingie for a client, and I did a cover for a future issue of Phantasmagoria. I have also turned down some recent offers because I am working on personal stuff and trying to keep my bandwidth under control.

What started out as a serious attempt to finally write my sand and sorcery game Dead Wizards, which changed to Sand in the Bone, morphed into a completely different game idea about a month ago. It is called GOZR (pronounced GO-zur). It is based on the same game system as Sand in the Bone but is entirely different in tone. Where Sand strikes a more serious tone, GOZR is balls-out sci-fantasy in the vein of early 80s romps like Heavy Metal and Wizards. It is an entirely visual game too. Meaning... I'm hand-lettering the whole fucking thing. And it's taking forever but I'm loving it. Something about doing hand lettering is relaxing and fulfilling to me. I don't purport to be great at it. I'm not a master letterer. But I have fun with it and I'm practicing the craft, hopefully getting better at it. 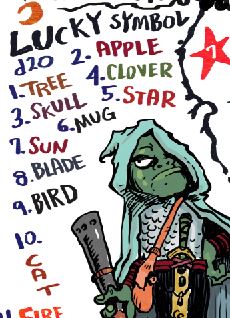 The game itself is an experiment. There's been no playtesting yet and I'm composing a lot of the rules, such as they are, on the canvas as I go. But it's a simple game without a lot of moving parts so I feel confident it will work. After all, there's not much new to the idea of rolling a d20 vs. a target number, is there? We kinda already know how that mechanic works.

The game is presented visually and is table-heavy. In fact, it's pretty much all tables. When it's all said and done you will be able to use this slim volume at the table even with little or no prep and run a fun romp of a game for a bunch of goofy bastards playing goofy bastards.

There is a The Pool element to the game. I made a few posts talking about Sand in the Bone's sand mechanic and GOZR, being more-or-less the same system, also has this mechanic. Here it's called GOOZ but it does pretty much the same thing. Spending your GOOZ lets you influence the game-story by adding facts or controlling outcomes, with a bit of a risk/gamble mechanic involved. I think this will be fun at the table.

I plan to run some GOZR for the Monday night group the next opportunity I get. This will definitely be before I finish it, so I can make tweaks if playtesting suggests it.

So that's what I've been doing, for those who are curious. More later.

Oh, I should caveat here. I have a long and proud history of getting heavily into an idea and then abandoning it. I make no claims that GOZR will actually be finished. However, I do tend to muscle through and finish things after some critical mass has been established. I have pumped many many hours into this thing so far. I have several finished pages that took a long time to complete. Plus this is a sci-fantasy romp... and I tend to greatly enjoy doing those. What I have a problem with is the more serious, dry projects. I am not good with that. So odds are this will actually see the light of day.