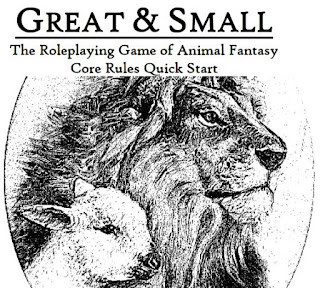 Great & Small is a game of animal fantasy by Robert F. Mason. It's based on OD&D. This is a little review of the quick start rules.

This game uses a form of Target 20, which is itself derived from the original game's design.

The idea is a simple one. PCs are animals in a dangerous world. I haven't read the entire PDF so I can't say for sure, but it feels like this is meant to be more realistic, less magical. Like you'd be dealing with animal factions and natural dangers rather than wizards and dragons. However, the rules do mention magic and magic items a few a times. This is a game system, not a setting, so it assumes you will build your own animal world and if you want magic stuff then you add magic stuff. This PDF doesn't include any of that stuff.

Though it is a D&D style game it definitely breaks the mold a bit. There are no classes or levels as far as I can tell. Which I love! I am more and more moving away from class and level myself.

Anyway, the game's mechanic is Target 20. You always roll 2d10 + mods in an attempt to score 20 or better. Now, I've voiced my distaste for games that use One Mechanic To Rule Them All... but I get it. It's a natural thing to want to do. And it certainly works. I just find it incredibly boring when a game has very little mechanically to interact with.

And yes, at the same time I strongly dislike crunchy games with too damn much to interact with. I'm a Goldilocks, sue me.

This game looks pretty nifty. The blog has a lot of information on it, much of which indicates more fantasy and magic than the quickstart suggests. I have no idea if the game is complete or still in production but the latest post was from July 2016.

By This Axe is a 12 page medieval fantasy battle game by Chris Kutalik. Yeah, that Kutalik!

This is a "mercifully short" book. No interior art, so the thing is all business. Layout is simple and clean.

I do not pretend to know a damn thing about miniatures wargming, nor do I care. It is not something I've ever engaged in nor had the inclination to engage in. Would I? Sure. I would. And By This Axe seems like a reasonable, short set of rules for doing so.

The only dice are d6s (and lots of them). You define your units in a way that is similar to an RPG. For example, they have Fighting Capacity, Armor Saves, and Special Abilities. There are monsters too. Seems cool. 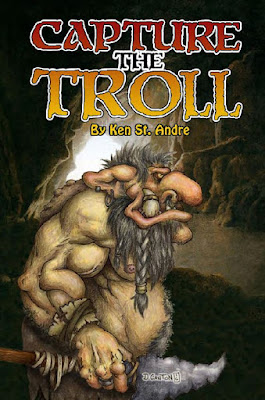 This is a 16 page GM adventure for T&T in which the PCs are summoned by the mad old fart of a wizard Mingoh the Moneyless to go forth and capture a troll for for his wondrous zoo of monsters. The text makes some funny comments about how run-down and old the wizard is and that his crew of servants are also run-down and old (those poor middle-aged harem girls).

There's a nice map. It seems like a fairly simple little cave-crawl with some wilderness adventuring to lead into it.

There were some annoying typos in this. It's such a small book that every little mistake sticks out like a sore thumb. But small press, y'know? We love our small press and all its foibles.

Some cool art in here from the infamous S.S. Crompton (Grimtooth, Demi). The cool cover is by a dude named Darrenn Canton, who I have gamed with before and know a little bit. He's a Kentuckian like me. He's really damn good at drawing these husky, buff fantasy figures.
This post is a continuation of this series right here you can clicky clicky on.
Posted by James V. West at 7:48 AM