I don't know shit about Cutty Sark. Are they still active? (edit: doesn't appear so) 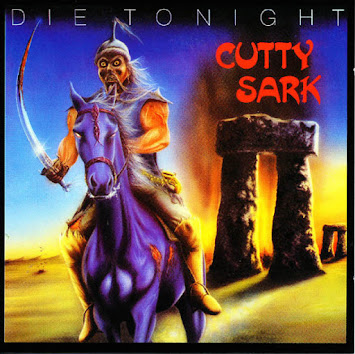 Die Tonight was a good listen. For me. But hey, if you didn't grow up in the time when this kind of album was being made then maybe this will sound like hot garbage to your ears. It isn't clean or exceptionally produced. It's rough and basic and I dig the shit.

So I'm not a music expert. In fact I'd call myself a music IDIOT. I like stuff, I don't like stuff, and I really struggle to identify why. I also struggle to compare music or talk about it in a meaningful way. That being said, this album reminds me of metal groups from the 80s such as Mercyful Fate and maybe Accept or Running Wild. If you like that shit, you might like this shit.

The cover is interesting. The name "cutty sark" is a ship, right? So this is a stark contrast to the art.

Gaming it: A band of madness-plagued desert warriors ravage the land, burning stone monuments (?). The PCs must track them and put a stop to their evil! The leader, Cutty Sark, has a demon sword that possesses his soul and the souls of his band mates.