I've been drawing more robots lately and thinking about a robot RPG. One of the thoughts I had is that a percentile system, not unlike Star Frontiers, would suit a robot RPG quite well.

So I started noodling the idea more and I have a draft of My Robot Head in progress. I don't know how far I'll take this. I hope I'll see it through and publish, but this is just a fun thing I'm playing with right now. Stay posted.

As a teaser, the game would probably be set in the future in our solar system. I actually had written a bunch of this last year and I wrote that it takes place in or around 3100. All humans are dead. They left behind a fairly vast empire of cities and colonies on the Moon and Mars and places. But they are all dead because some AI asshole decided to bake a DNA timebomb into them and remove them. Now you are robots in this future where your masters, the humans, are gone. What do you do?

So the game deals with the fun shit like robot combat, exploration, resources, etc. But also angst and ennui. Robots are self aware. They have to decide how to be a people moving forward without destroying themselves through warring factions. My Robot Head as the title refers to the inner struggle of a robot character to understand who they are and where they belong. The dawn of a new civilization with the raw power and mental prowess to very quickly destroy itself.

Percentile system inspired by Star Frontiers, but not a clone. Lots of information carrying over from Cozmic Metal Heads because My Robot Head as a concept came first. I actually stripped MRH down and turned it into a Troika! book, so now I'm circling back and revisiting the original idea.

The other idea is to publish a robot art book. I'll have enough pure robot drawings that I could do a little art book in POD someplace. Sorry folks, I'm just not up for the whole physical printing and shipping one man show at this time. POD is where it's at for me. At least for now or until someone wants to publish my shit in nice, shiny volumes I don't have to physically handle. 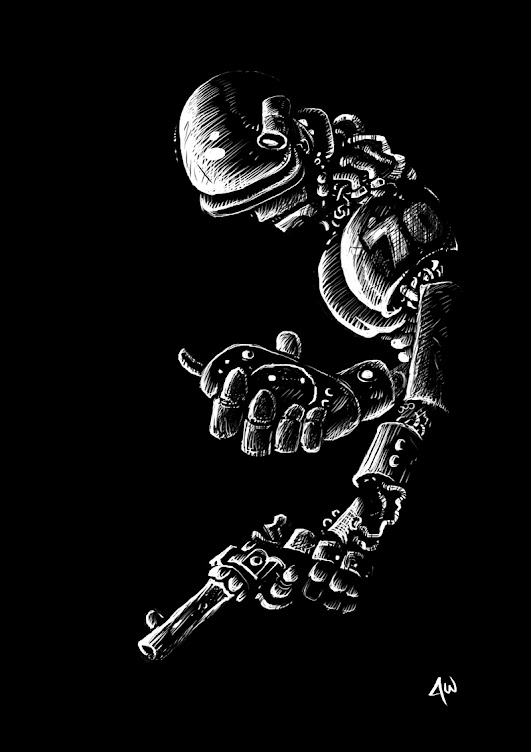