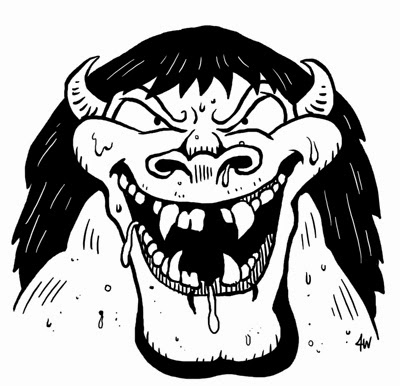 These troll-cousins get their name from the wicked grin always plastered across their evil faces. Leering trolls feed on the suffering and misery in the creatures they target. They will eat their victims, eventually, but not before torturing them as long as possible. If it can drag a victim to its lair, a leering troll and its companions will torture the helpless creature for days. This, apparently, is why it grins.

Leering trolls are about 7' tall with sickly yellow and green skin that is always bursting with painful sores. They do not regenerate in the same way as their cousins. Instead, leering trolls will regenerate 1 hit point for each hit point of damage they inflict upon a target. They are extremely sensitive to the condition of the target and will avoid killing it outright. If the target is within 4 hit points of death the troll will vomit a stinking brown liquid up to 10' at the target. On a failed save vs. paralysis the target falls into a comatose state. It will be aware of its surroundings but completely paralyzed and unable to communicate. If a leering troll hits a target for a deathblow it does not regenerate hit points for that strike.


The sores on this creature's skin secrete a flame-repelling goo causing them to take only half damage from fire-based attacks.
Posted by James V. West at 7:02 AM