Alignment has always been weird to me. And obviously it is the biggest point of contention in discussions of D&D.

The classic system uses 3 alignments: Law, Chaos, and Neutrality. This is how those alignments are described in B/X D&D: 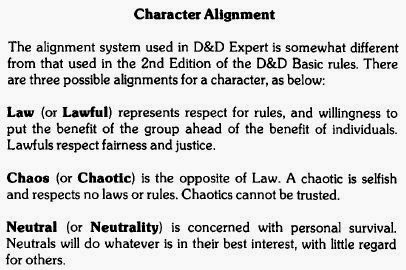 So there is no mention of good or evil in those descriptions, though the descriptions in the Basic Set do include some good/evil language. I suppose that means one could be a chaotic character and be...good. This notion is upheld in other places within the text, such as the description of the spell Detect Evil:

For years I didn't really understand this. And it is mainly because of my tendency to assume a LOT about what is in these books without actually reading them for years at a time. It is possible that I haven't read the description of Detect Evil in 25 or more years. So I believe I have made the mistake of assuming that a Detect Evil spell will reveal alignment. It doesn't. It only reveals intentions. So you could have a chaotic, villainous NPC in a scene in which that NPC is really only interested in the same goal as the other PCs, such as escaping a dungeon. Casting Detect Evil on him will not reveal anything.

Now it may be the case that once everyone finds an escape route the bastard turns on them. But to allow Detect Evil to predict a future that is not even being actively contemplated by the target of the spell would be to grant that spell enormous power.

The spell does indicate that items can be determined to be evil or not. I suppose this is because most items have no active agency. They simply are or are not evil.

The classic 3-point alignment system is actually quite useful, creatively. I love the 9-point AD&D system because it adds all those nuances. But if your alignment says NOTHING about your moral character that leaves a ton of freedom for you to explore the character in play.

And what about monsters? It seems like the monsters with a lawful alignment tend to be described as good or at least peaceable. But the chaotic monsters tend to be pure evil. Perhaps that is why lawful seems to indicate good and chaotic indicates evil? Sripping away the moral element you could create a chaotic monster that is described as being good, perhaps helpful to PCs under the right conditions.

But chaos is still described as selfish and untrustworthy. In a sense that aligns more readily with evil than good, since good suggests the opposite. I suppose that means in the end you can have a good chaotic creature...but it would still be a bit of a monkey wrench type of creature...getting in the way or causing trouble. Like some kind of imp.

/alignment musings for now.
Posted by James V. West at 8:16 AM