I wasn't entirely happy with my witch character class for LL/B/X, originally posted here. So I tweaked her a bit into what I feel is more representative of what I was going for. The main changes were to simplify the summoning power, give her the ability to fly, and remove the AC bonus for being naked. I didn't want to make this a character that, if clothed, was less powerful. So while naked she definitely has a great advantage in saving throws but no advantage to AC and she is limited on how many rings and things she can wear.

So here's the witch...again. And here's a pdf of the class for your pleasure and enjoyment.

A witch is a female practitioner of ancient magic. Witches tend to live alone or with other witches. They can commune with natural spirits, create magic potions, and cast a variety of spells using natural ingredients, often cobbled together on-the-spot.

Witches may not wear armor and may only use the staff, dagger, and other small weapons (sling, blackjack, etc.).

Commune with Spirits: A witch may summon one supernatural entity per day. The entity will appear in the witch's magic circle in 1d4 turns. The creature is trapped in the circle and cannot affect anything outside it. The witch may ask a question, which the entity is obligated to answer. The witch may only summon one entity per day. If she attempts to ask a second question it is up to the LL how the entity will answer, if at all.

Upon reaching the 9th level of experience a witch may compel a summoned entity to perform a task before it is released from her charm. The entity may then travel freely but only toward completion of the command. The entity is allowed a saving throw vs. spells minus the witch’s Cha modifier to resist the witch's command.

It is up to the LL to determine what kind of entity is summoned, though typically the HD of the entity should not surpass that of the witch.

Familiar: Witches possess the ability to cast the spell summon familiar without the gp cost. They may cast this spell at any point when they do not currently have a familiar. A witch’s familiar gains 1 additional Hit Die per 3 levels of the caster.

Flight: In addition to all other spells, witches may cast the magic-user spell fly once per day and an additional time per day for every 3 levels of experience (3, 6, 9, etc.). 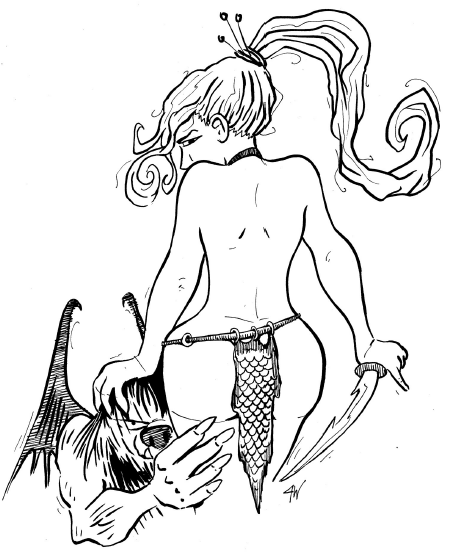 Potions: A witch can create a number of potions per month equal to her level + Wisdom modifier. The player may select potions from the Labyrinth Lord Potions table, or from other sources made available by the LL. A witch has a 10% chance per level of being able to identify a potion.

Skyclad: When naked, the witch is wrapped in natural magic. She gains saving throw bonuses equal to half her level (rounded down) to all saving throws except breath attacks. In this mode the witch may wear no more than 1 piece of jewelry or other accoutrement.
Posted by James V. West at 6:56 PM