In my current Labyrinth Lord campaign I have a few NPC barbarians. I realize that a barbarian is basically a fighter. And I realize there are lots of takes on the barbarian class out there to be had. But, as with the witch, I needed something that fit my own campaign world. So here is my barbarian.

I went for something that was a little bit Conan, little bit ranger, and little bit hilljack. Not overpowered, not redundant.

And here's the pdf for it too.

Barbarians are a hearty, uncivilized lot that inhabit cold mountains, deep forests, badlands, and virtually any landscape outside the scope of civilization. These savages take care of their own and will fight to the death to defend family, friends, and others of their tribe.

They are often unaccustomed to magic and may harbor fears and superstitions against it. Because of this distrust, barbarians suffer a -2 penalty on saving throws vs. spells.

Barbarians use the ranger's level progression, saving throw, and attack value charts. They are proficient with any weapon common to the area in which their tribe lives. When using foreign or elegant weapons they have a -2 penalty to hit. They may wear any armor, though it may affect some of their class abilities. 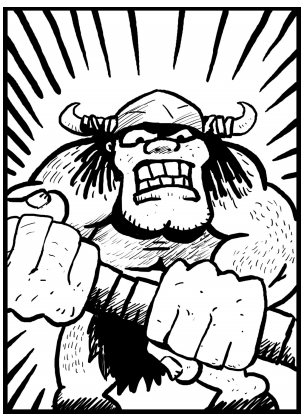 Battleclad: Barbarians who wear no armor may adjust AC by ½ their level out of toughness and battle fury.

Rage: A barbarian may choose to forgo all pretenses of battle finesse and attack his enemies in a blind rage. In this mode the character makes two attack rolls, each at a -3 penalty. If successful, such attacks deal +1d4 damage. For every 3 levels of experience (levels 3, 6, 9, etc.) the barbarian can make an additional attack roll, but always at a -3 penalty. If the barbarian attempts to make an attack on a round directly following a rage attack he suffers a -1 to hit and may not rage. It takes a moment for him to regain his composure.

Wild Movement: Barbarians run, jump, and climb like wild beasts, based on the climb walls skill of a thief of the same level. This skill does not allow them to climb sheer surfaces like a thief, but instead they may climb trees and cliffs, leap over small canyons or across small rivers, or out-run most normal humans and humanoids.

Detect Magic: A barbarian has a 2-in-6 chance to detect the presence of magic in an item or surrounding a place or person. The player must announce an intention to be aware of such magic. The barbarian cannot assess the nature of magic, simply its presence.

Tracking: Barbarians track as rangers of the same level but with a base 75% chance of success.