Each Episode is a 2 hour Labyrinth Lord play session over Skype or other interweb services. 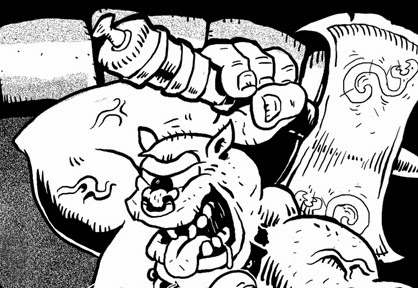 The group gets plenty of rest in the comfort of the mysterious safe igloo and then sets out. They note that Urtel often clutches at a rather nice necklace around his neck. It is a black chain with a green gem. No one asks about it. Later, Urtel is witnessed to convulse and have a bit of a spasm. But due to other dangers this observation is not discussed.

They decide to continue trusting the magic frogs. Urtel momentarily urges them to follow the orange path indicated by the magic map, which deviates from the frog path. He claims to have been down that path and to have seen a cave. But he is easily convinced to abandon the idea.

Following the frogs leads them down many paths. White wailers are calling in the distance and the paths are increasingly confusing, seeming to spiral in on each other. The party suspects illusions might be at work. Gul’Daryh climbs a tree to get a look around but sees only more trees. Then the white wailers close in, chasing them down the final frog path and to the end of the forest.

Battle is joined! Sparruu and Gul’Daryh are caught by the wails, frozen for several moments. But arrows, axes, and Windsongs prevail and the group makes it out of the Ice Forest alive.

Outside they ascend a steep slope and discover that while they may be out of the woods they are not out of danger. Cyclopean orcs are nearby! These one-eyed red monsters stand between the party and the road to Frimmsreach.

A plan is devised. Sparruu Bedazzles the orcs to lure them while Gul’Daryh and the others attack from behind. The Half-Elf’s fire magic and swordplay take out the cyclopean leader while the others are decimated by Sparruu and gang.

Among the minor loot taken from the one-eyed monsters is a brass ring bearing the emblem of a wolf…it is Norgyl’s brother’s ring! Could Argus be so close? Did the orcs leave him dead?

The gang take off in the direction they suspect the orcs’ last raid occurred.