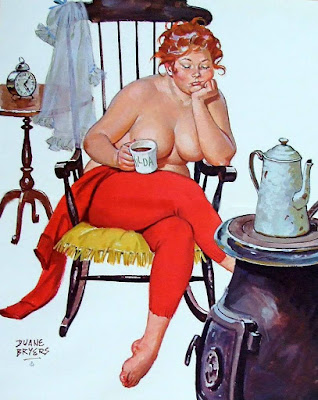 I think it was the early 2000s when I laid eyes on Hilda, the pinup creation of the late Duane Bryers. Hilda was a pinup girl in the 50s. But unlike most other pinup girls, Hilda had some junk in the trunk. She was chubby, and lovely, and fun.

Bryers' style is akin to a lot of painters at the time and, to my eyes, reminds me very much of Norman Rockwell. Because everyone who painted in that style at that time reminded everyone of Normal Rockwell. Rockwell was the Frazetta of American culture painting.

But I think it's more fair to say Bryers was akin to Gil Elvgreen, a contemporary whose style is more similar to Bryers than someone like Alberto Vargas... all of whom are best known for painting pinup ladies. God bless 'em.


I don't know much about Bryers outside of his Hilda work. I wish I owned some of those old Hilda calendars. I wonder how much they go for on eBay? Anyway, I know he painted other stuff, such as western scenes, and perhaps Hilda wasn't what he wanted to be locked into. I don't know. But he did a lot of paintings of this one character and she seemed to be very popular.

It it interesting to me that though Hilda was often painted in comical situations, such as farting next to the stove, wearing a flour sack for a bikini, and falling off of logs, she is quite often painted in quiet, peaceful moments of bliss or even in overtly sexy poses. There's a shitty trend in media to present the fat girl as comic relief or a figure to be aided by the protagonist to make them look better. How often is the fat chick on TV allowed to just be hot? Or to just be, for that matter?

Hilda is great. I'm happy Duane Bryers created her and dedicated so many paintings to her adventures.

What Would I Steal?

Willingness to be goofy, charm, and those lovely paint strokes.
Posted by James V. West at 9:54 AM